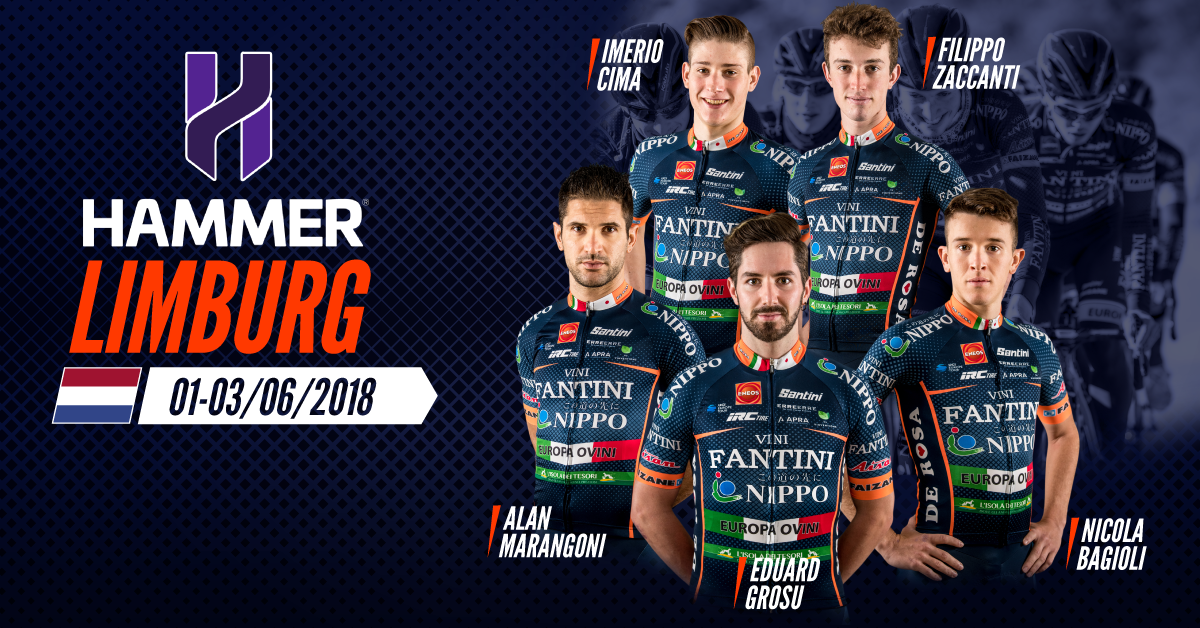 NIPPO VINI FANTINI EUROPA OVINI: ONE WEEK LATER THE HAMMER STAVANGER, IS YET TIME TO RACE THE HAMMER LIMBURG.

Just finished the Hammer Series of Stavanger in Norway, where the Italian-Japanese team closed with a great 7th place. The  NIPPO Vini Fantini Europa Ovini is preparing the race of Limburg, that will be the second race of the year with the new Velon & Infront format, to assign the title of “Best Team of the world”.

One year ago in Limburg the first edition of the Hammer Series, the brand new format launched by Velon & Infront Media to assign the title of “Best Team of the World” will be as usual composed of 3 days of racing, the first one for climbers, the second one for sprinters and the third one dedicated to a team time trial chase. In 2018 the first event of the Hammer Series already took place in Norway last week, and it is now time to ride the second one in Limburg, where NIPPO Vini Fantini Europa Ovini team will try again to be the best Professional team in race as in 2017 and as in the first race of 2018. From the 1st to the third of June it is yet time to race. The final event of the 2018 Hammer Series will be in Hong Kong, next Autumn.
THE LINE-UP.

The #OrangeBlue line-up that made a great race in Stavanger, reaching a very good 7th place, has been almost totally confirmed, to try to confirm this very good result. To lead the team in the sprints will be again Eduard Grosu, well supported by the experience of Alan Marangoni. The leader for the Hammer Climb, after a wonderful race in Norway will be again Nicola Bagioli that in Stavanger reached lots of points for the team demonstrating his ability to be inside the right actions of the day. With him another young Italian talent as Filippo Zaccanti, that in Stavanger has been many times in  the top of the race even if he didn’t reached the “point zone”. After his first hammer experience in Stavanger in Limburg he can give his importante contribute to the team. New energies will come from the fifth rider of the team, the young Imerio Cima who will try to be a protagonist especially in the Hammer Sprint, the day dedicated to sprinters, and on the final day of the Hammer Chase.
THE DECLARATION.

To coordinate the tactics from the team car, the Sports Director Mario Manzoni: “It is a very full period for us, with 3 different and important races at the same time. Tour de Korea in Asia, GP of Lugano this Sunday and the Hammer Series. Unluckly we had also some important injuries, as the one of Lobato that was supposed to be one of our leaders for the Hammer Series. The Hammer Series are a format very different from standard races, for this reason in Limburg we will ride with the same line-up of Stavanger that already understood very well the format. Leader for the sprints will be Grosu and Marangoni, for the climb day Bagioli an Zaccanti, with the new name of Imerio Cima good support especially in the Hammer Sprint.”
THE RACE.

From1st to 3rd of June the central point of the event will be located in Hammer Sportzone, with collateral events, fan village, and kids games together with Pro riders. About the competitive part of the event, the first day is dedicated to climbers, the second one for sprinters and as usual the final one for time trial. 16 teams will be in race, 12 World Tour teams and 4 Professionals, with NIPPO Vini Fantini Europa Ovini as only team representing Italy in the new format.

As usual to follow the whole event will be super-easy with the Facebook Live streamed by the official Hammer Series page, together with the team pages.