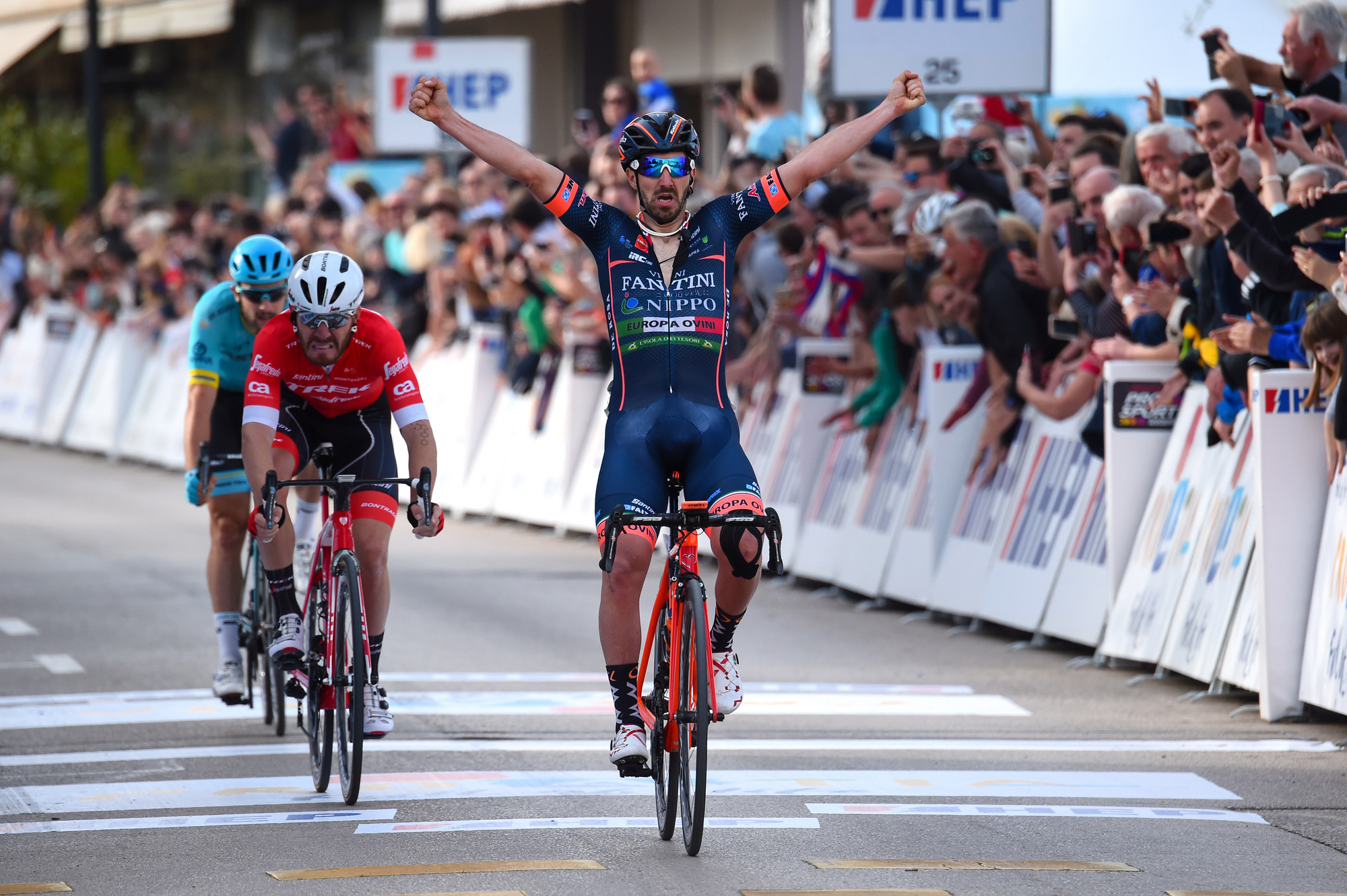 Stage and jersey leader for Eduard Grosu who wins the second stage of the Tour of Croatia with a great final sprint.

The first win of the season for the NIPPO Vini Fantini Europa Ovini team comes thanks to the sprinting ability of the #OrangeBlue sprinter, but also thanks to a great team effort, which has allowed Eduard Grosu to be in the best possible position today to win. Fifth place for Juan Josè Lobato, fundamental in the final km of the stage. Tomorrow Eduard Grosu will defend the Jersey of leader of the General ranking won today in the city of Zadar.

The disappointment of the third place reached in the inaugural stage soon turns into a victory for Eduard Grosu, who wins the second stage of the Tour of Croatia and become the leader of general ranking. A grit and strength sprint to demonstrate the good physical condition in which the Romanian sprinter is and the desire to achieve this result. Juan José Lobato, decisive for Eduard Grosu in the final kilometres of the stage, achieved the fifth place of the day. For the NIPPO Vini Fantini Europa Ovini team it is the first win of the season obtained at the end of a stage race impeccably by all the #OrangeBlue riders.
EDUARD GROSU VICTORY

If the rain has influenced the inaugural stage of the Tour of Croatia, certainly the strong wind was the protagonist of the second stage. 231km races with strong wind that led the organizers, at the end of the GPM of Velebit, to neutralize the race for several kilometers. In the first part of the race there were four protagonists who undertook the breakaway of the day, constantly controlled by the #OrangeBlue team and by the other ranking teams. A series of fans lead to split the group, which returns all together at the foot of the last climb. The race explodes right at the end of this last climb, when, after the downhill, the riders enters the Zara circuit. A technical circuit full of curves that enhance the skills of the sprinter Eduard Grosu, who, at less than 800 meters from the finish line, anticipates the other sprinters going to take the stage victory and the Leader jersey of the Tour of Croatia. Behind him Giacomo Nizzolo (Trek Segafredo) and Riccardo Minali (Astana Pro Team) respectively in second and third position. Good fifth place for Juan José Lobato, precious help for Eduard Grosu in the final kilometers of the stage.

THE WORDS OF THE PROTAGONIST

Promise kept for Eduard Grosu, who yesterday declared to see in today’s stage the perfect opportunity for his redemption. He did it in the best way, cutting the finish line first and winning the Red jersey as leader of the general ranking. With these words the Romanian sprinter describes the success just obtained and thanks his teammates: “It was a strange race, conditioned immediately by the strong wind. As I said yesterday, today I wanted to make a result, I wanted to win. I won thanks to the work of all my teammates, precious in covering me from the wind in most of the race. I knew the final circuit of Zara well and could not be surprised. When 800 meters were left I decided to anticipate the others sprinter going to cut the finish line first. I do not know how the stage of tomorrow will go, but for the moment I enjoy this important victory for myself and for the Team and the Red Leader jersey “. Even Valerio Tebaldi, sport director in the team car, want to describe is happiness: “Eduard has sprinted as a true champion with grit and the desire to make a result. We ride this stage as a great team and the victory testifies how much good we have done”.

Tomorrow Eduard Grosu will have to defend the leader’s jersey in a strong stage of 134km with a climb finish. The Romanian sprinter will try to best honor this jersey, obtained with determination and ability. While in Croatia Eduard Grosu and his teammates #OrangeBlue will race the thirty stage, in Italy the other part of the team will race the fourth stage of the Tour of the Alps (Chiusa-Lienz, 134.4km). You can follow the live of the double appointment on RaiSport and Eurosport from 14.00.

RANKING OF 2ND STAGE OF TOUR OF CROATIA