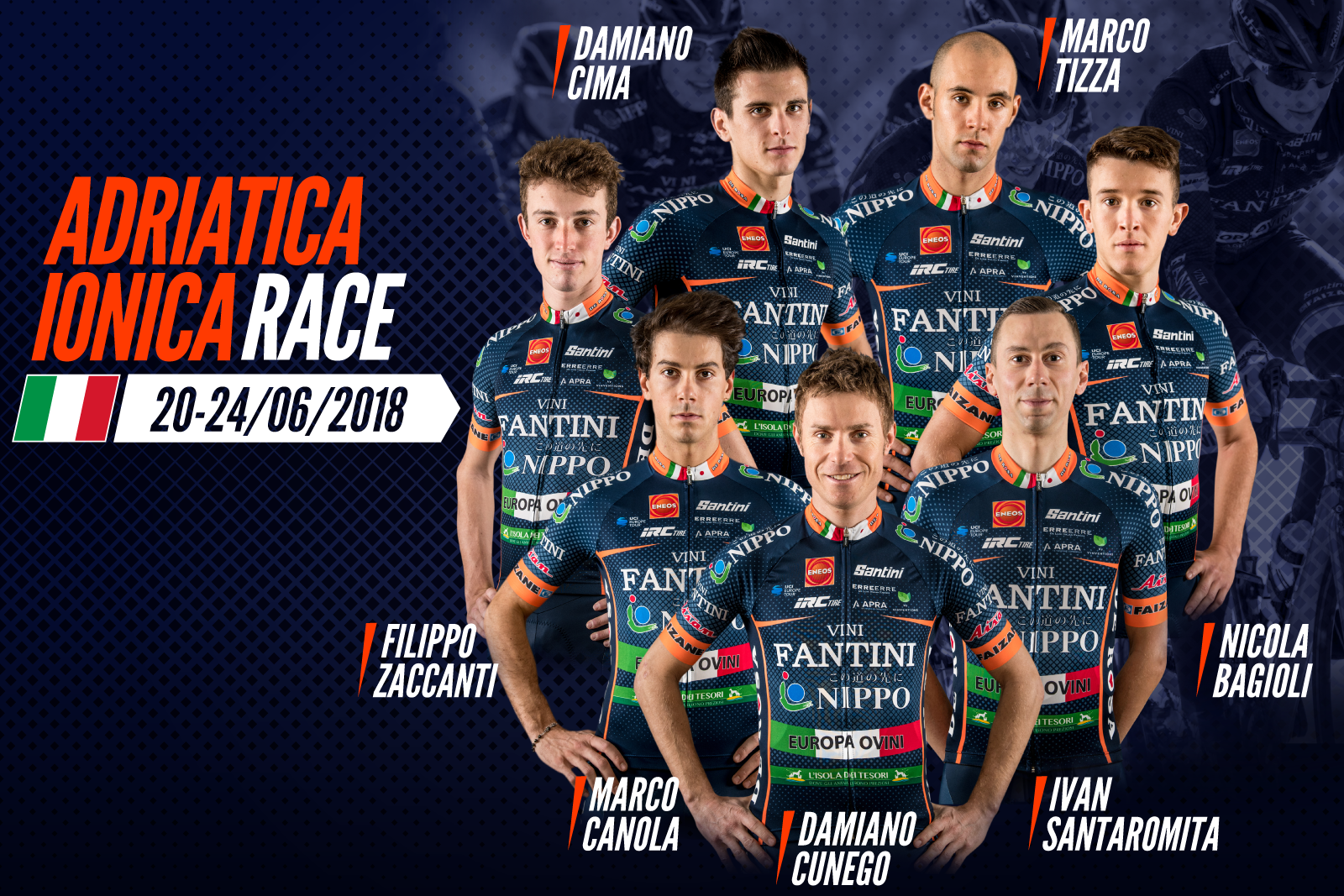 First edition of the new Italian race designed and conceived by Moreno Argentin. 7 #OrangeBlue riders at the start to best honor the debut of this stage race. Damiano Cunego, at his penultimate race of the career will be the leader together with Ivan Santaromita. Filippo Zaccanti the young climber, Marco Canola for sprint arrivals, together with Nicola Bagioli and Marco Tizza. Damiano Cima the teamworker.

NIPPO Vini Fantini Europa Ovini will be soon back to Italian races. After prestigious races in Switzerland and Slovenia, from June 20th to June 7th the #OrangeBlue riders will be at the start of the first edition of the Adriatic Ionica Race, the new Italian stage race conceived and “designed” by Moreno Argentin with the ASD Sport Union. To honor the first edition an important line-up has been selected by Mario Manzoni, with Damiano Cunego that will race his penultimate career race, ahead of the Italian road championship next June 30th.

The Sports Director Mario Manzoni carefully selected the 7 riders, based on the characteristics of the race and especially on the riders actual condition, shown in recent competitions in Switzerland and Slovenia. The demanding route will see three climbers #OrangeBlue take care of the general ranking. The first one is Damiano Cunego, riding his penultimate career race but well-motivated, the second one Ivan Santaromita that at the Tour de Suisse has shown an excellent condition on very challenging routes and finally the young Filippo Zaccanti who at the Tour de Suisse wore for three stages the best climber jersey at his first career World Tour race. The captain of the #OrangeBlue Marco Canola will be precious in the fastest stages, like the fourth, with him Marco Tizza and Nicola Bagioli. The young man team Damiano Cima completes the roster, important team-worker, but also a valuable man for the time trial.

Mario Manzoni explains his choices: “It is a race with a double meaning and relevance for us, it is very important to honor a new Italian race and also very important for the Cycling Cup. We chose a balanced Roster, with captains for the hardest stages, riders for mixed arrivals and for the time trial. Damiano Cunego will be at his penultimate act and is focused to give his contribution to the team, all his teammates come from the Tour of Slovenia or the Tour of Switzerland and have have the best condition among riders of our team. The leaders for climbing stages are Ivan Santaromita and Filippo Zaccanti coming from a good Tour de Suisse and they will be important for the General Ranking, while in the others stages we will have Canola has main leader, with Bagioli, Tizza and Cima that demonstrated to have a good condition in Slovenia.”

At his first edition, the race it is formally an 2.1. UCI category race, but with a strong start-list, with 5 World Tour teams and many Professional teams. 5 stages, mainly for climbers, with a possibile finish-line for fast riders and a team time trial also very important for the general ranking, also if mostly will be decided on mountains.

The race will be broadcasted on Facebook by PMG Sport and will be shared on the official channels of the NIPPO Vini Fantini Europa Ovini team.