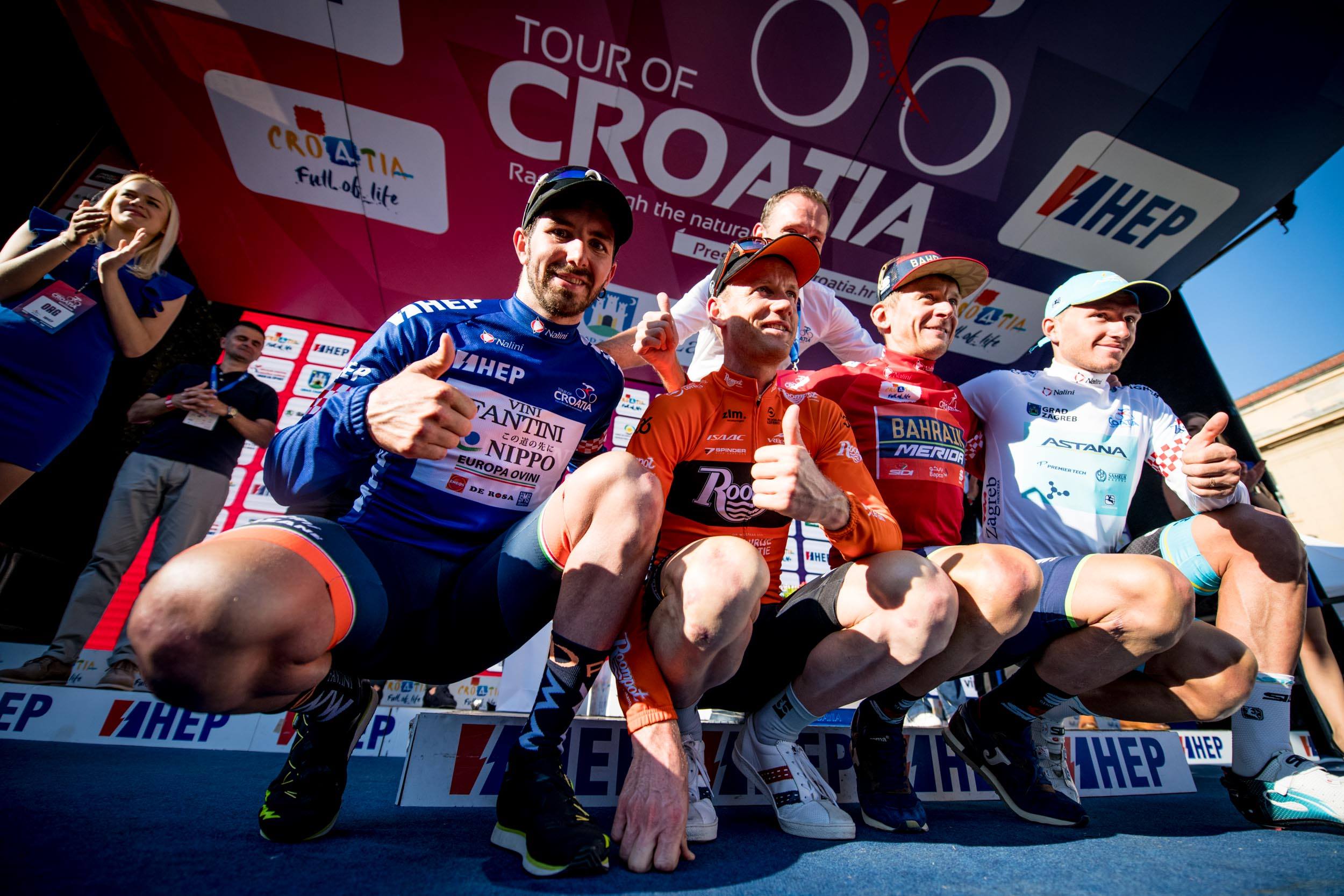 The sprinter Eduard Grosu achieved the third place in the final stage of the Tour of Croatia, winning the Blue jersey of the leader of the points classification.

The victory in the second stage, the two third places obtained in the first and sixth stage and the intermediate sprint won during the Tour, allowed him to get the necessary points to win the special classification. 8th place of the day for Juan José Lobato, once again decisive for the final kilometres. 2nd season jersey won for the NIPPO Vini Fantini Europa Ovini team after the victory of the KOM classification achieved by Nicola Bagioli at Tirreno-Adriatico.

It ends with a 3rd place and with a Blue jersey achieved the Tour of Croatia 2018 for NIPPO Vini fantini Europa Ovini team. Eduard Grosu reaches third position in the final stage of the Tour, consolidating his leadership in the points classification. In Zagreb, the #OrangeBlue sprinter climbs on the top step of the podium to celebrate the Blue jersey meaning the victory of points classification. Top 10 for Juan José Lobato, which demonstrate once again to be precious in the final kilometers.

The last stage of the fascinating Tour of Croatia is a fast fraction of 151.5km connecting Samobor to Zagreb. After the stages dedicates to the climbers during the previous days, this represented the last chance for the fast wheels to be protagonists in this edition. For the NIPPO Vini Fantini Europa Ovini team the leading rider was undoubtedly Eduard Grosu, already winner of the second stage and looking for victory in the last fraction. The race starts from the first km at a very high speed, due to the presence of the first sprint of the day placed only 3 km from the starting line. The #OrangeBlue sprinter is the first to cut the intermediate sprint line, securing additional points for the final victory of the points classification jersey. The race soon assumes a new dimension, with a breakaway made by 6 riders including the Japanese #OranegBlue Hayato Yoshida. This will be the fundamental action that will decide the final result. The first two positions will be reached by two athletes able to remain in the leading group, while the third position will be reached by Eduard Grosu at the end of the sprint in the chasing group. 8th position for Juan Josè Lobato, again important in the final km.

THE DECLARATION OF PROTAGONIST

With these words Eduard Grosu shows all his satisfaction for the jersey won and a bit of regret for the 3rd place in the final stage: “I’m really satisfied for the Blue jersey just won. I was a goal that the team and I had and I’m happy to have achieved it. I admit I’m little regret for the third place obtained in today’s stage. Hayato Yoshida did a great job to get into the breakaway of the day, but we did not manage to get back into the lead group in the final part of the stage. I wanted to win to better honor the work that my teammates have done today. I want to thank them one by one for sacrificing themselves for me and for the team in these six stages of the tour of Croatia. We have achieved good results in these days and I am convinced that by continuing along this way we will be able to obtain many others results in the next races“.