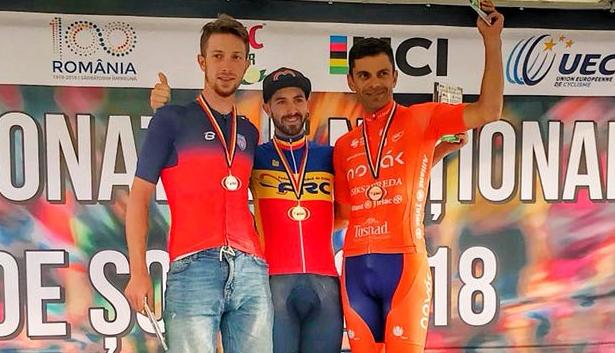 If winning is always challenging, repeating is even more difficult. Eduard Grosu hits the Romanian National time trial title for the second year in a row and for the third time in his career. Sunday the Road Championships in Japan and Romania where the #OrangeBlue sprinter will try to repeat the success of 2014. On Saturday 30th July will be time of the Italian championships.

THE RACE AND THE HAPPINESS OF EDUARD GROSU

In the race ended in 39’ and 09’’ with 17’’ ahead of the second classified, there were no pitfalls. “A daily race marked by rain, with 30 seconds delayed start. 15 km of false flat, hill and downhill, I had to risk a little in downhill with the lenticular wheel but I had a good margin in the first part that I could handle in the second. I’m really happy for the victory, wearing the flag of my country when I run is always beautiful. In time trial I have the opportunity to continue to wear it, waiting to see how the next road championship will end”.

Sunday 24 of June will be time for the road championships in Romania, where for the #OrangeBlue there will still be Eduard Grosu. On Sunday, also in Japan will be time of national championship with the sprinter Hayato Yoshida in the race with the NIPPO Vini Fantini Europa Ovini jersey. Finally the Italian national road championships will take place on Saturday 30 of June, where there will be 10 riders of the team in the race.