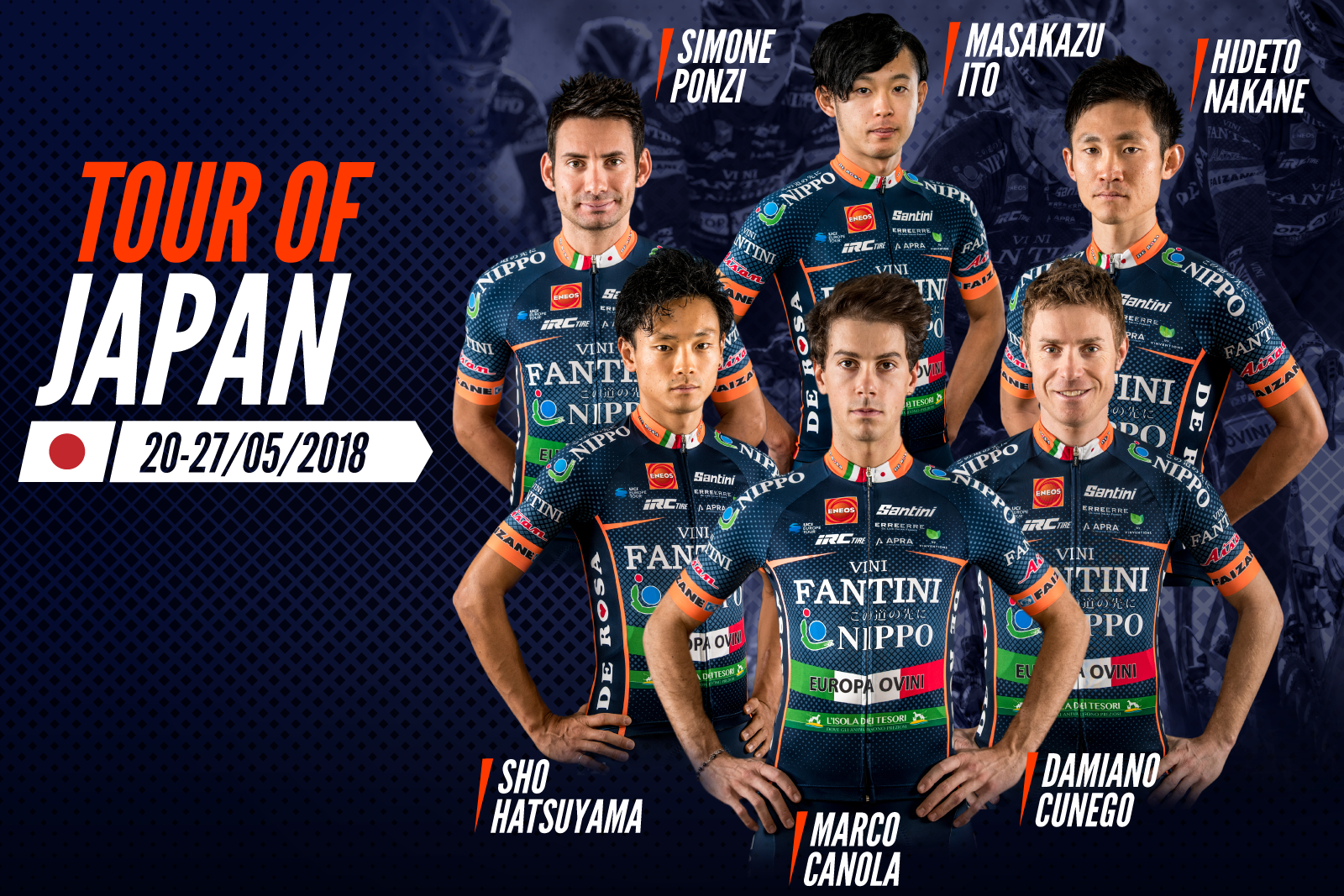 NIPPO VINI FANTINI EUROPA OVINI: READY TO FIGHT FOR THE VICTORY IN THE HOME RACE.

The Italian-Japanese team is preparing with great concentration the Tour of Japan. Marco Canola, already winner of 3 stages and the point jersey in 2017, will be the leader, together with Sho Hatsuyama winner of the KOM jersey in 2017. With them Damiano Cunego and the Japanese climber Hideto Nakane, ready to battle in Mont Fuji, Simone Ponzi will be an important supporting rider for the leaders and Masakazu Ito will complete the roster.

It is official the line-up for one of the most important events in the May calendar of the Italian-Japanese team, that will race the “home-race” with an high level roster, looking for other successes after the 3 stage victories and the special jersey gained in 2017.

The leader of the team in the race will be the captain Marco Canola, winner of 3 stages in 2017 edition, and winner also of the points ranking. The Italian rider is strongly motivated to continue his line of success in Japan, where he also won the very prestigious Japan Cup (1.HC category). To reach again important results he will have with him a strong line-up. Sho Hatsuyama, winner of the KOM jersey in 2017 and the only Japanese to wear 1 of the 4 final jersey in the previous edition will be with the team that will start the race with 2 jersey winner of last year edition.

Damiano Cunego will be also to the start, having prepared with great attention and motivation this race, both to help Marco Canola and to ride well the prestigious stage of Mont Fuji, together with the teammates and Japanese climber Hideto Nakane. With them Simone Ponzi, expert and fast rider, ready to help Marco Canola and possible alternative in some stages. To complete the roster Masakazu Ito, important supporting rider for the teammates.

On the team car in this race the Japanese Team Manager and Sports Director Hiroshi Daimon, that knows very well the Japanese race.

On the team car in this important race Hiroshi Daimon, that comments with this words the race: “I have selected the members for the Tour of Japan by their general strength for each. It’s my responsibilities to bring out strongest points of each riders as a team director. Marco Canola who has won at all of races in Japan in last year, he will be kept watch on from all our rivals. But we’d like to think it positively and want to do the best way even if hard situation. Damiano Cunego who decided to retire in upcoming June, was really looking forward to participate in the Tour of Japan from the beginning of this season. From last week, his physical condition was not perfect and I worried but at last night, it has recovered and his doctor permitted him to go to the Japanese race. It will be his last race in Japan, so I expect him enjoying with his Japanese fans who are supporting very long time.”

8 stages to ride, from 20 to 27th of May, will compose the Tour of Japan 2018. There will be room for sprinters, but also mixed roads stages, with queen stage on the Mont Fuji. To the start also the World Tour line-up Bahrain Merida, the Japanese selection and two Professional teams, such as Israel Cycling Academy and the NIPPO Vini Fantini Europa Ovini team. Among best competitors in race also the Team Ukyo with the winner of the 2017 edition, the Spanish rider Oscar Pujol.