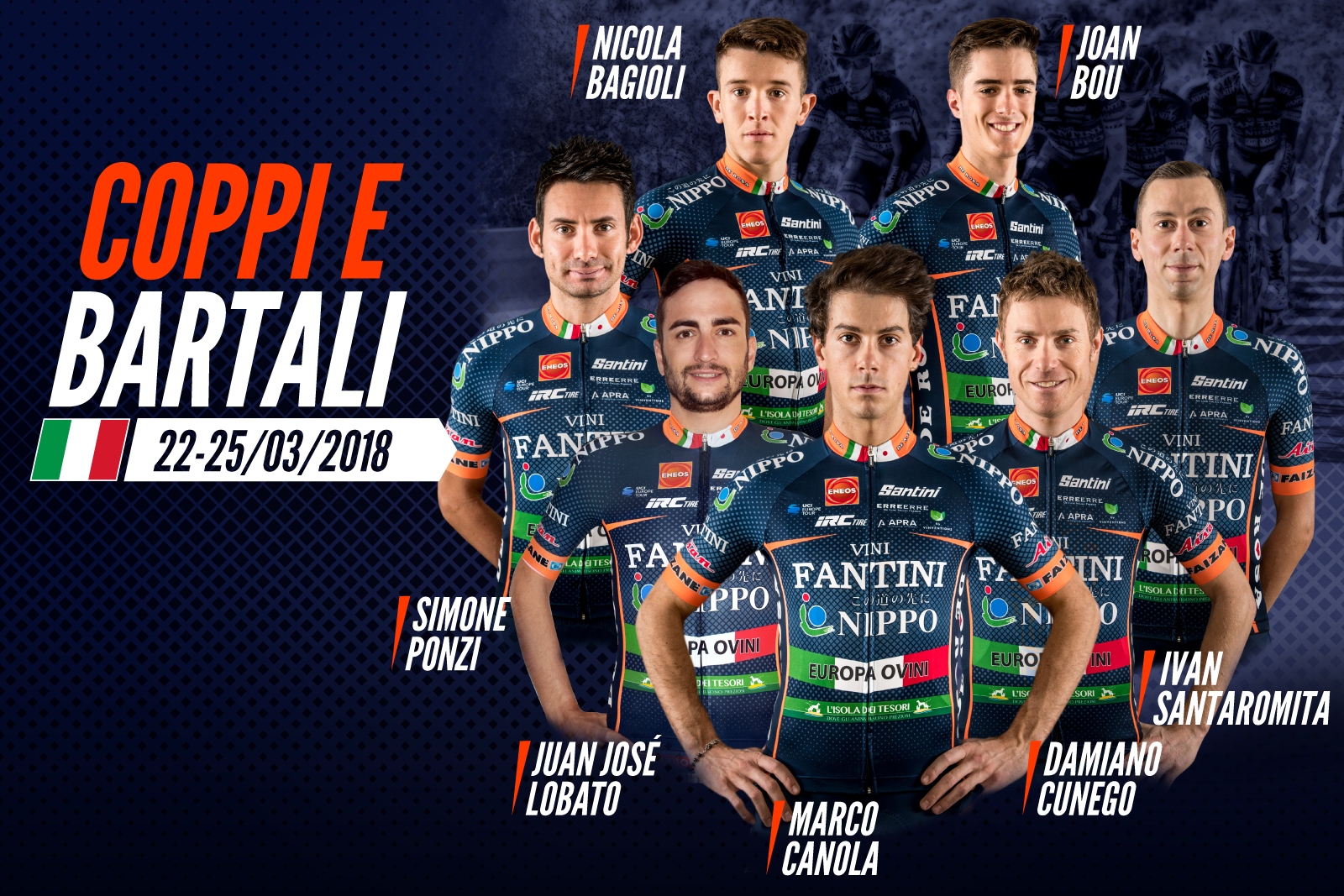 #OrangeBlue ready for the double activity in Italy and Belgium. On Wednesday will start the important Belgium race (1.HC), while fromThursday to Sunday the team will focus on Coppi & Bartali the race valid for the Ciclismo Cup.

Double race for the NIPPO Vini Fantini Europa Ovini team, in race between Italy and Belgium. On Wednesday 21st of March the Driedaagse De Panne-Koksijde, important competition of 1.HC category. From Thursday 22h to Sunday 25th it’s time for the Coppi and Bartali, historical meting of the Italian calendar valid for the Ciclismo Cup in which the NIPPO Vini Fantini Europa Ovini team will start with the lineup that fits the best with the road.

5 fractions in 4 days of race, 6 World Tour teams, together with many Professional teams, among them the 4 Italian teams. As usual will be very important to battle for the stage victory, but for the Ciclismo Cup will be even most important the General Ranking, coming from the result of 5 stages very different. One team time trial, one single time trial, one flat stage for sprinters and a couple of mixed and quite hard stages.

On the team car the Sports Director will be Mario Manzoni: “The Coppi & Bartali represents or us one of the key meetings of the season. The selected line-up comes from the condition of each rider, but it is also made keeping in mind the different stages. Marco Canola will be our charismatic leader with possibility to battle for some stage victory, while Ivan Santaromita and Nicola Bagioli will be very important for the General Ranking. Simone Ponzi will have a double role of team-worker but also individual goals, he is growing up in condition. The two Spanish riders will have important roles, Lobato demonstrated in Milano-Sanremo that is almost ready to be competitive and very helpful for the team, while Joan Bou is a complete rider both for time-trials and mixed stages. Damiano Cunego will give all his experience, he knows very well the race that he also won in the past. He will help the team and could play a role in hardest stages.”

To watch the highlights of the race, please follow the Team Official Facebook Page, where the videos will be shared thanks to PMG Sports.

202 km of Belgium race, that means great passion from the public and hard mixed road, with a good rhythm of race. De Panne, race of 1.HC category, will see the on the starting line 5 World Tour teams and 15 Professional teams. To lead the team will be Eduard Grosu, complete and fast rider growing up in condition. After two top10 in Tirreno-Adriatico he will try to improve his results in this race. With him Sho Hatsuyama, the Japanese rider coming from long breakaway in Tirreno-Adriatico and Milano-Sanremo, he is in a very good condition Ready to help Grosu in the final sprint Imerio Cima and Damiano Cima, while Kohei Uchima will be the experienced rider of the team, ready both to help his teammates and to try a breakaway. To complete the line-up Hiroki Nishimura. Last minute forfait for Alan Marangoni, because of a stomach ache that stop it during the night.

Valerio Tebaldi will be the Sports Director leading the team: “For our team it is the first Belgium race of the season, in this pre-monuments race. Eduard Grosu will be our leader for the sprint, supported by the Cima brothers. The Belgium race are perfect also for breakaways and attacks because you can never know how will finish the race. For this reason our 3 Japanese riders can have a very important role, with Sho Hatsuyama coming from very good breakaways in Tirreno-Adriatico and Milano-Sanremo. Our team will battle both to be in the breakaway of the day and in the final sprint, even if unfortunately we will miss the experience of Alan Marangoni, because of a stomach ache during the night.”