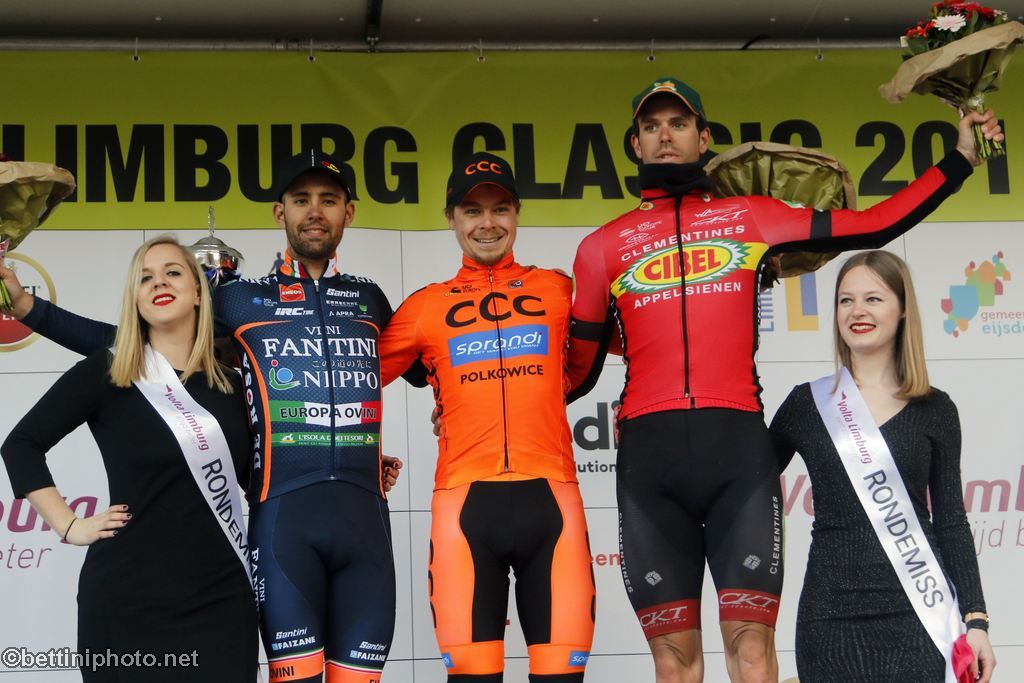 NIPPO VINI FANTINI EUROPA OVINI: MARCO TIZZA CLOSE TO THE VICTORY. 2nd PLACE IN VOLTA LIMBURG, THE ONLY ITALIAN RIDER IN THE TOP10.

The feeling among #OrangeBlue and The Netherlands continues. After the victory of 2017, reached by Marco Canola, today is Marco Tizza to take the podium, going so close to the victory. Marco Tizza made a good job going inside the breakaway of the day with 5 riders. Thanks to this breakaway he plays for the victory until the final km. Waiting for the first victory this podium for Marco Tizza is one of the most important of his career.

NIPPO Vini Fantini Europa Ovini close to the double. After the victory of 2017 edition reached with Marco Canola, today is Marco Tizza time to go on the podium of this important race, closing with a good second place. The rider born in 1992, coming from GM Europa Ovini, reach his first seasonal podium. A podium deserved in all these first months working well and hard for his teammates, in special way for the leader Marco Canola.

Hard race, in The Netherlands. 197,5 km of North weather and roads. In the 2018 edition the leader of the team for this race is Marco Canola, winner of 2017 edition, supported by Juan Josè Lobato and Simone Ponzi. After 40km of race it starts the breakaway of the day, with Marco Tizza in the group of escapers. The action seems to be under control by the bunch, but when 40 km miss to the finish line the breakaway becomes of 7 riders and the advantage grows up.

The breakaway is the right one, going until the end of the race, under the finish-line. The most important moment for the victory is the last bend, 400meters before the finish-line, where Marco Tizza is 3rd. On the final straight road he overtakes Jimmy Janssens, but Jan Tratnik (CCC) is yet so far to catch and he is the winner of the day.

Also in 2018 edition an #OrangeBlue jersey is on the Volta Limburg podium, but this time it is 2nd place. A very prestigious one, but with a little bit of regrets.

Marco Tizza ends a long day in the breakaway with a final sprint on the pavè and comments with these words: “It was part of our strategy to be inside a possibile breakaway, both to give the chance to our leader to stay covered until the end and both because we thought that a breakaway could be dangerous and arrive until the end. When I understood that our long breakaway would arrive, I try to play for the final victory because I knew that I could be fast. Unfortunately I took to slowly the last bend so on the final straight road I overtake only one competitors closing with a final second. I want to thanks my teammates that gives me this chance.”

Marco Tizza has to wait for his first victory as a PRO, even if today he went really close to it, adding another prestigious placement to his list. A list composed also by a 6th place in Coppa Agostoni in 2017, a 5ht place in Memorial Pantani in 2016 a 10th place in Giro dell’Appennino in 2016.

The next challenge of the team will be again in the North in Belgium with the Flèche Brabanconne and few days later in The Netherlands, with the Amstel Gold Race.