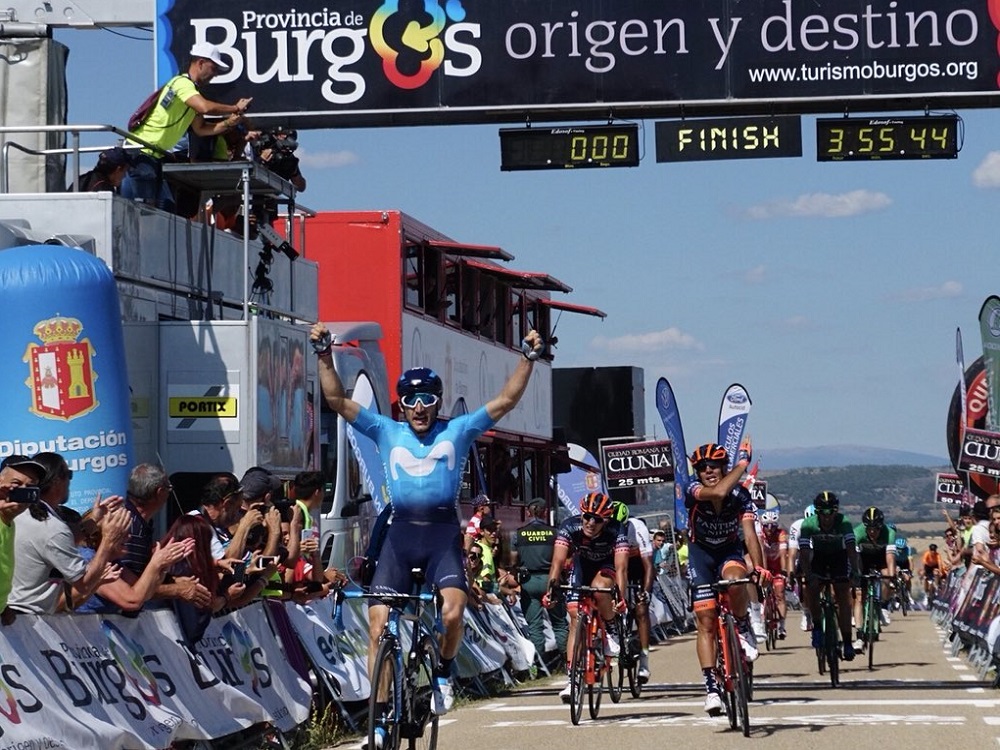 Marco Tizza one step away from the victory in the fourth stage of the Vuelta a Burgos 2018. After the fourth place in the inaugural stage, today reaches the second position. Behind him Nicola Bagioli, who closed the race in third position going to complete a podium marked by NIPPO Vini Fantini Europa Ovini team. Once again, the #OranegBlue team became the protagonist thanks to the excellent teamwork that allowed the two riders to be in the best possible position for the final sprint. Tomorrow last fraction of the Spanish race.

The fourth stage of the Vuelta a Burgos 2018 is marked by #OrangeBlue, thanks to the important double in the podium of the day. After a choral team work by the riders led by the sporting director Valerio Tebaldi, Marco Tizza and Nicola Bagioli finalized the work done by their team mates reaching respectively the second and the third position at the end of the sprint of Clunia. A second part of the season that opens up to the best and gives further certainty to the NIPPO Vini Fantini Europa Ovini team to be a protagonist in the events of the final part of the season.

From Monasterios san Pedro Cardeña to Clunia, for a stage of 165km characterized by continuous ups and downs and a slightly uphill finish. The speed from the group is high from the first km where the riders in the race try to stay as much as possible in the first positions to avoid dangerous fans. Although the speed is sustained, the first part of the race will be characterized by the breakaway of the day involving five riders. Constantly controlled by the group and by the riders of the NIPPO Vini Fantini Europa Ovini team, it will be taken over in the last 10km, km in which the stage will be decided. A fall in the last km considerably lengthens the group that is preparing to conclude the ascent of Clunia. In the first positions the #OrangeBlue Marco Tizza and Nicola Bagioli who closed the stage in second and third position behind a wild Carlos Barbero (Team Movistar).
THE PROTAGONISTS

The #OrangeBlue Marco Tizza, after having reached the 4th place in the inaugural stage of Burgos, reaches the second place of the day finalizing in the best way the team’s work. Satisfied for the placement and for his physical condition he comments with a hint of regret the race just ended: “We had a good team race this afternoon. The whole team worked as hard as possible for Nicola and I to stay in the first positions to be able to play the final sprint in the best way. I thank them for this. I am a little regretted for the second place, but I am well physically and I am convinced that sooner or later I will win”.

Even Nicola Bagioli, after the unfortunate accident in the last km of the first stage, manages to reach the podium in the fourth day of competition, earning the third position in the sprint. These are the words with which he comments on the race, exalting again the excellent work done by his teammates: “From the first km the team has worked hard to keep us in the top positions of the group. Today’s stage could be subjected to dangerous fans, so it was essential to stay in front. I thank my teammates for their work and the support they have given us. In the end I and Marco tried to do our best to reach the victory, but Carlos Barbero was of another level “.

Tomorrow the #OrangeBlue will be involved in the last stage of the Vuelta a Burgos, in a 141km stage dedicated to the climber with arrival at Lagunas de Neila.