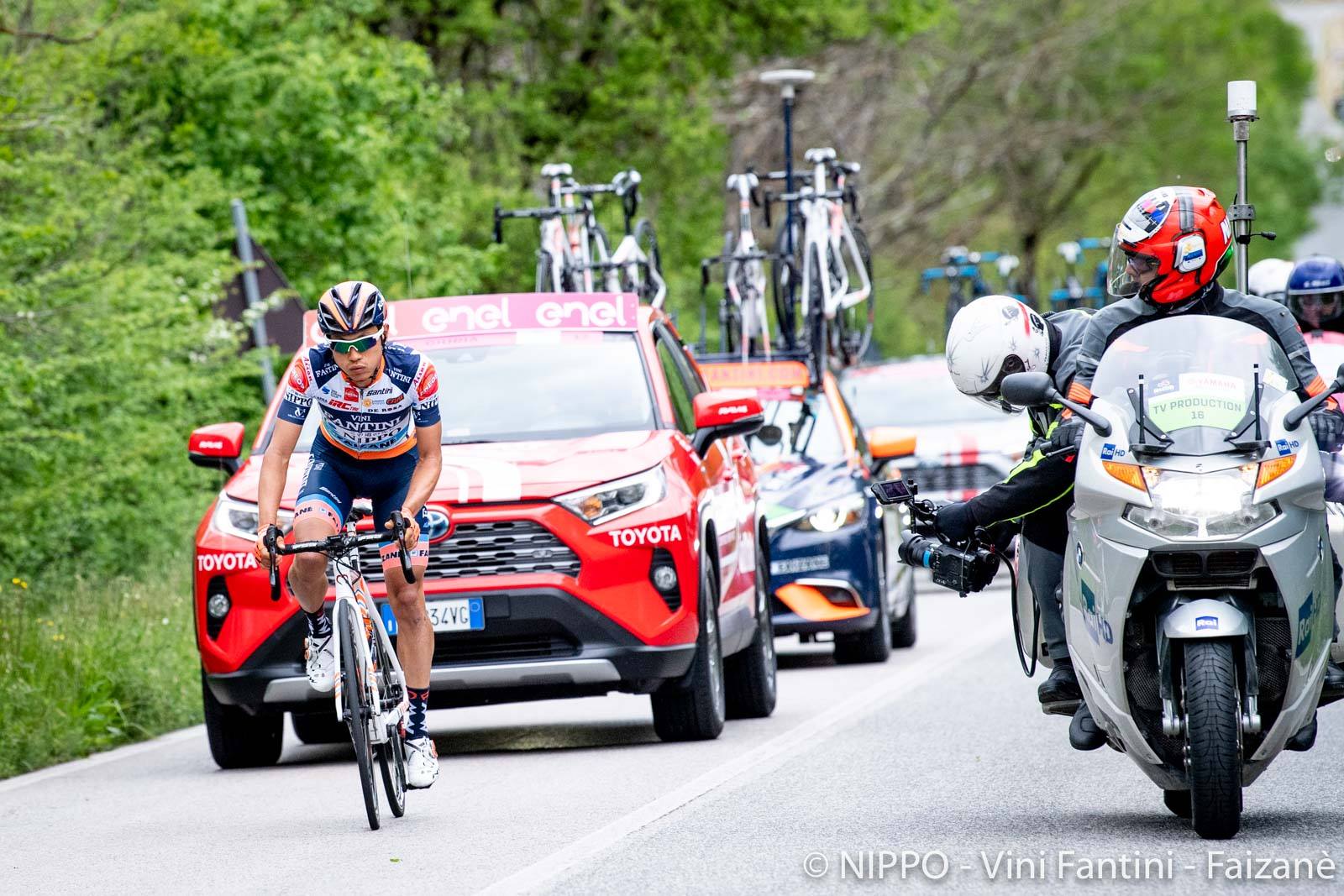 144 KM OF SOLO BREAKAWAY IN THE THIRD STAGE OF THE GIRO D’ITALIA.

The Japanese rider of the NIPPO Vini Fantini Faizanè team excites all the cycling fans with a heroic solo breakaway of over 144km in which it has achieved a maximum advantage of 7 minutes and 12 seconds on the group with an average speed of 38 km per hour.

Japanese cycling must save this date. Not for the results, but for the attitude. As Sho Hatsuyama reminds to all the journalists during the finish-line interview big Japanese riders have been to Giro before him, such as Beppu or Arashiro, but what is unique today is the kind of action he made, in a windy day he rode 144km alone, in front of the group in a solo breakaway. A big emotion for him and for all the cycling fans that loves this kind of romantic and quite crazy actions.
230km of race, in a windy day here in Italy with start from Vinci in Tuscany and finish line in Orbetello close to the sea. Big expectations for the sprinters but also for the breakaway of the day. After the second stage with Damiano Cima head of the special ranking of combactivity, today it was up to Sho Hatsuyama to join the action and breakaway of the day. He was the first to start, imagining that a group of riders would be formed behind him, but this was not the case and Sho Hatsuyama chose not to join an action but to become the action himself, honoring in the best way the race invitation, because he could get up, wait for the group but he decide to continue, for 144 long km, a solo action with the only support of the Japanese Sports Director Takehiro Mizutani that from the second team-car supported him. 7 minutes and 12 seconds is the maximum advantage achieved by the Japanese athlete on the pink jersey group that at the finish line was welcomed as a winner by many of his new fans and by many journalist.
THE RIDER DECLARATION.

Sho Hatsuyama comments with these words: “I’m tired but happy. Today I went in the breakaway because the team wanted to be protagonist with an action. Yesterday it was time for my partner Damiano Cima, today it was up to me but I didn’t expect to find me alone. But I was supposed to attack and I did, as I did in the past. Certainly it was tiring but beautiful because everyone looked at me, the people on the roadside shouted my name, I knew that even from Japan they looked at me and also for the team it was important. I’m at my first big Giro, the goal is to get to Verona and do some other good action. But not tomorrow, tomorrow is time to recover some energy remaining in the group.”
THE RIDER.

The Giro d’Italia could give so much visibility, but it’s important to remind that Sho Hatsuyama is not new to actions and also to final results. The rider born in 1988 is at the height of his athletic maturity and in his second year in the NIPPO Vini Fantini Faizanè team he is experiencing a strong growth, passed by actions and results already in previous years. Often on the run in the Tirreno-Adriatico 2018, where he helped his teammate Nicola Bagioli to catch the jersey of best climber. Sho Hatsuyama won the Japanese national championship in 2016 and it was best climber at the Tour of Japan in 2017.

Together with Hideto Nakane, designated captain of the team for the Tour of Japan and one of the Japanese athletes who can aspire to the summon for the Tokyo 2020 Olympics and his dream also passes through Orbetello, the dream also passes for the third stage of the Giro d’Italia n.102, where with a heroic and solitary action he rode 144km alone, in front of the group.
THE ACTION IN NUMBERS.