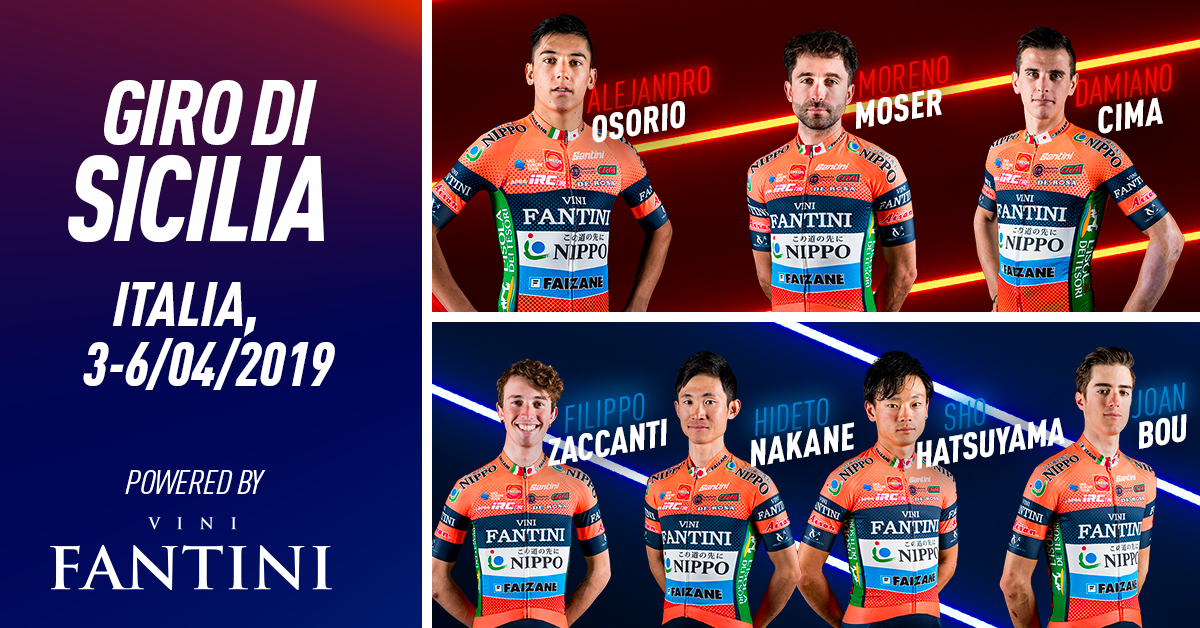 Thanks to RCS Sport and the Region of Sicily the big cycling is back the wonderful Italian region. 4 stages in which the 7 #OrangeBlue riders will try to leave the sign. 4 climbers, the Japanese Hideto Nakane, the Colombian riders Alejandro Osorio, the Italian Filippo Zaccanti and the Spanish rider Joan Bou. 3 riders for the mixed stages such as Moreno Moser, Damiano Cima and Sho Hatsuyama.

The big cycling is back to Sicily, thanks to RCS Sport and the Sicily Region, from 3 to 6 of April with the Giro di Sicilia. The NIPPO Vini Fantini Faizanè will ride this important race with an international line-up composed by 7 riders coming from 4 different countries.
THE LINE-UP.

At the start of the Giro di Sicilia this Wednesday 7 #OrangeBlue riders ready to compete with high level teams, but looking for an important results. Hideto Nakane and Alejandro Osorio the top climbers with Zaccanti e Bou supporting them, Damiano Cima and Sho Hatsuyama the team workers, Moreno Moser for mixed stages.

Moreno Moser, Hideto Nakane, Alejandro Osorio, Filippo Zaccanti, Damiano Cima, Sho Hatsuyama, Joan Bou.
On the team car the two Italian Sports Directors and Alessandro Donati. These the words of Mario Manzoni looking forward to the competition: “We start the Giro di Sicilia happy for the victory of Giovanni Lonardi in Thailand, but with big motivation to do good things also in Italy. Hideto Nakane and Alejandro Osorio could be our top riders for the climb arrivals. Hideto Nakane is growing very well his condition for our top races of May, while Alejandro Osorio will face his second European race as a Pro and he is learning a lot of things. Damiano Cima and Joan Bou will work for the team and could have some personal chance to attack, while Sho Hatsuyama and Filippo Zaccanti are improving condition after some period off race.”
THE RACE.

The Giro di Sicilia is composed by 4 stages, the first one with official start from Catania and the last one on Saturday 6th of April with the spectacular climb on mount Etna. The stages will involve wonderful locations of the Sicily such as Milazzo, Capo d’Orlando, Palermo, Catania, the Mount Etna and Giardini Naxos, showing to all the international public all the wonderful locations of this region. All the stages will be broadcasted on Rai2 in Italy and by many International broadcasters.