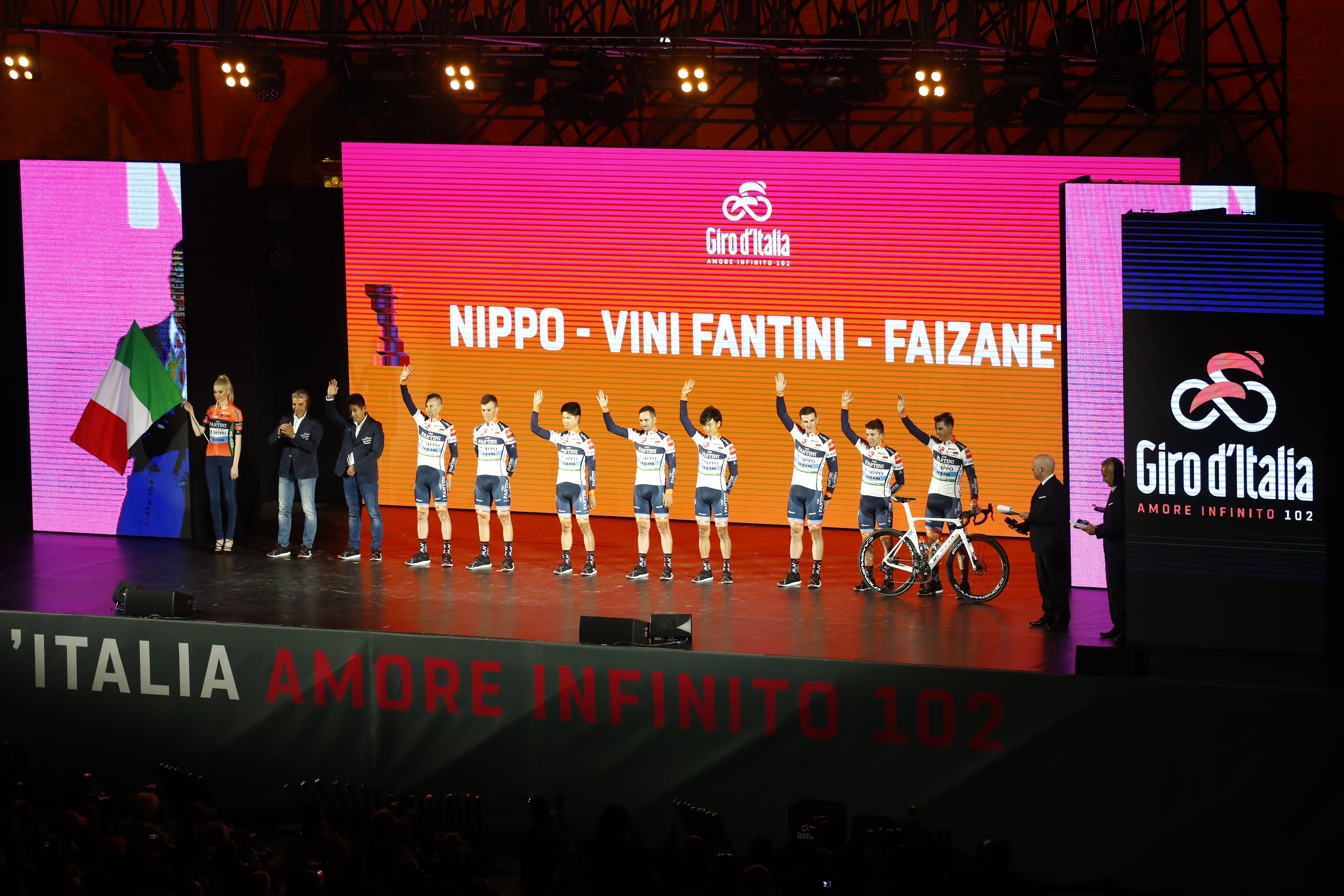 NIPPO VINI FANTINI FAIZANÈ: THE BALANCE OF THE FIRST WEEK OF GIRO D’ITALIA.

Damiano Cima the “king” of intermediate sprints, Sho Hatsuyama the rider with the most kms alone in front of the group, with about 1,000 km of breakaway collected by the #OrangeBlue riders in a week. 2 the top 10 reached with Canola and Lonardi. These are the numbers of the team in the first week of Giro d’Italia.

About 1.000 km of breakaway collected by the team to the attack, rode by #OrangeBlue riders in front  of the group. Actions that have guarantee to the team a great media visibility and many hours of national and international television broadcasts.

Damiano Cima with 564 km rode in front of the group he is the second absolute rider to have collected more km of breakaway and he is the leader of the ranking of intermediate sprints that will be awarded in Verona at the end of the last stage. With him, 3 other teammates have launched important actions for the team. The most famous is the one of Sho Hatsuyama, who rode 144 km of solo breakaway alone at the head of the group. Nicola Bagioli and Ivan Santaromita are also in action in this Giro. Marco Canola, 8th in stage 8 and Giovanni Lonardi 9th in stage 5 collected the two top tens of the team until today.

Francesco Pelosi, general manager of the team declared: “The balance of the first week of the Giro d’Italia for the team is positive. We reacted to the difficulties of the first stage and overcame the many injuries suffered just before of the Giro which caused some defections and some delays in the condition of some of our athletes. To these we have made up for with an attack run that would allow us to be present in 6 of the 7 actions carried out in this Giro, collecting almost 1,000 km of escape in front of the group in a week. Sho’s escape has a great relevance to the Japanese and throughout Japan. Damiano Cima with a good 564 km of escape is the leader of flying goals but all the boys have run well collecting also 2 top 10 of stage with our leader Marco Canola and Giovanni Lonardi young talent to follow and now, overcome the physical difficulties we are ready to face the best of our possibilities the next two weeks of the Corsa Rosa, the most important event of our season. Finally we are happy and proud to have had as important guests managers of important Japanese companies and we will continue to have them also in the continuation of this Giro.”

Valentino Sciotti, CEO of Farnese Vini and of the Vini Fantini brand, declares himself happy: “I am very happy and satisfied with the strategy and conduct of the race of the team, the sports directors and the riders at this start of the Giro d’Italia. Thanks to the many attacking actions of the riders, culminating in the solitary action of Sho Hatsuyama, we have collected many hours of national and international television live in one of the national popular Italian events one of the most followed sporting events in the world. Of course for the team the goal remains to maximize with a sport result, but as a sponsor I can only be happy, because I believe that our brand and the team jersey have had an incredible, if not the most relevant, media visibility in this first part of the Pink Race. I have had feedback in every area.”
SAVE THE CHILDREN.

An attack strategy that contributed to the visibility of an important project. In fact, the NIPPO Vini Fantini Faizanè team carries the Save The Children sticker on all its bikes to commemorate the “Stop the War on Children” campaign promoted by the international association. The #OrangeBlue are in fact the official Save The Children team at the Giro d’Italia, and for this reason every km traveled on the run, giving media visibility to the project has a double meaning.

Many marketing activities have been started by the team in the first week of the Giro d’Italia.

In fact, in collaboration with CRAI it is possible to win a Protos De Rosa identical to those used by the team during the Giro d’Italia and 10 official Santini racing suits.

The Italian-Japanese team, in collaboration with the L’Isola dei Tesori brand, is also looking for its team mascotte. In just one week of the Giro d’Italia, record numbers were registered with 1,000 applications and over 10,000 votes. A race experience with the team at the next Italian championships is up for grabs for the winner of the competition and a year of free spending at the L’Isola dei Tesori sales points.