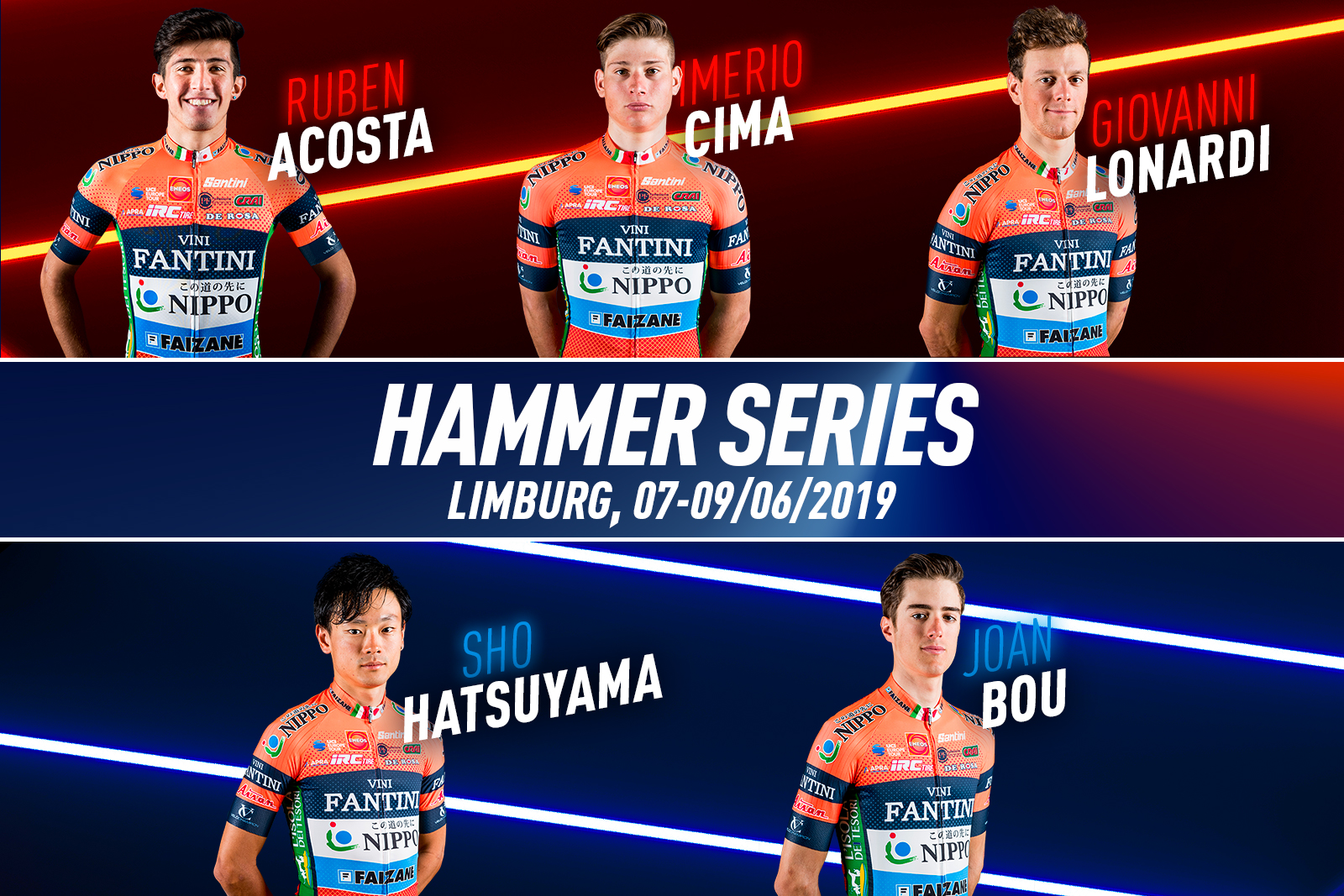 With an excellent Giro d’Italia closed, crowned by a great victory by Damiano Cima, the #OrangeBlue are now ready to face a double European race. From 7 to 9 June the Hammer Series, Sunday 9 June the Lugano GP.

The Pink Ride is over and the NIPPO Vini Fantini Faizanè team is about to face a double important European competition to the Hammer Series in Limburg, in The Netherlands and the GP Lugano in Switzerland.
HAMMER SERIES – LIMBURG.

For the third year in a row the #OrangeBlue riders will participate to the Hammer Series, the innovative team competition created by Infront & Velon to assigns the title of the Best team in the World. For two consecutive years the Italian-Japanese team has been the best Professional in the race. From 7 to 9 June in Limburg, #OrangeBlue will try to repeat themselves. DS Valerio Tebaldi will lead the team in the team-car, while among the top men there will be the sprinter Giovanni Lonardi, back from two top 10 at the Giro d’Italia and already winner in his first year among PRO and Sho Hatsuyama the Japanese veteran from a Giro d’Italia as a protagonist, frequently attacking in the from of the bunch. With them the sprinter Imerio Cima and the climbers Joan You and Ruben Acosta to be competitive at the Hammer Climb.

“Our riders are strongly motivated for this international race. As usual our team will honor this competition even if we know that the level is very high. Sho Hatsuyama and Giovanni Lonardi are back from a great Giro d’Italia with a good condition. While Imerio Cima, Joan Bou and Ruben Acosta had more time to rest after Tour of Japan and will be ready to be protagonist in a such competitive and intense race.”
GP OF LUGANO.

On Sunday the team will also be at the start of the Swiss competition at the Lugano GP, where in 2017 #OrangeBlue triumphed with Iuri Filosi. The DS of the Giro d’Italia, Mario Manzoni, will be in the team-car, with a competitive line-up that will have to assess the state of some recoveries from injuries. Marco Canola, Ivan Santaromita and Nicola Bagioli, among the most suitable for characteristics, but they are recovering from physical problems that conditioned them during the Giro d’Italia, while Juan Josè Lobato and Damiano Cima, in excellent condition, will be precious team workers due to the road race. Filippo Zaccanti, fresh winner of the best climber’s jersey in the Tour of Japan, completes a balanced rose that is ready to be competitive.

GP of Lugano, the complete line-up:

“We are ready to face an important race that we already won in the past and in which we will try to  be competitive, even if we have to recover some riders from the Giro d’Italia. Nicola Bagioli has just finished the treatment for the fever that forced him to retire from the Giro d’Italia a few days ago, while Ivan Santaromita and Marco Canola are recovering from the after-effects of falls and infections that have been dragged throughout the Pink Race, but have from them the good athletic condition that leaves you a great Giro. Filippo Zaccanti after a good Tour of Japan can certainly be one of the protagonists, while for the rather hard race Damiano Cima and Juan Josè Lobato will be important team men. “