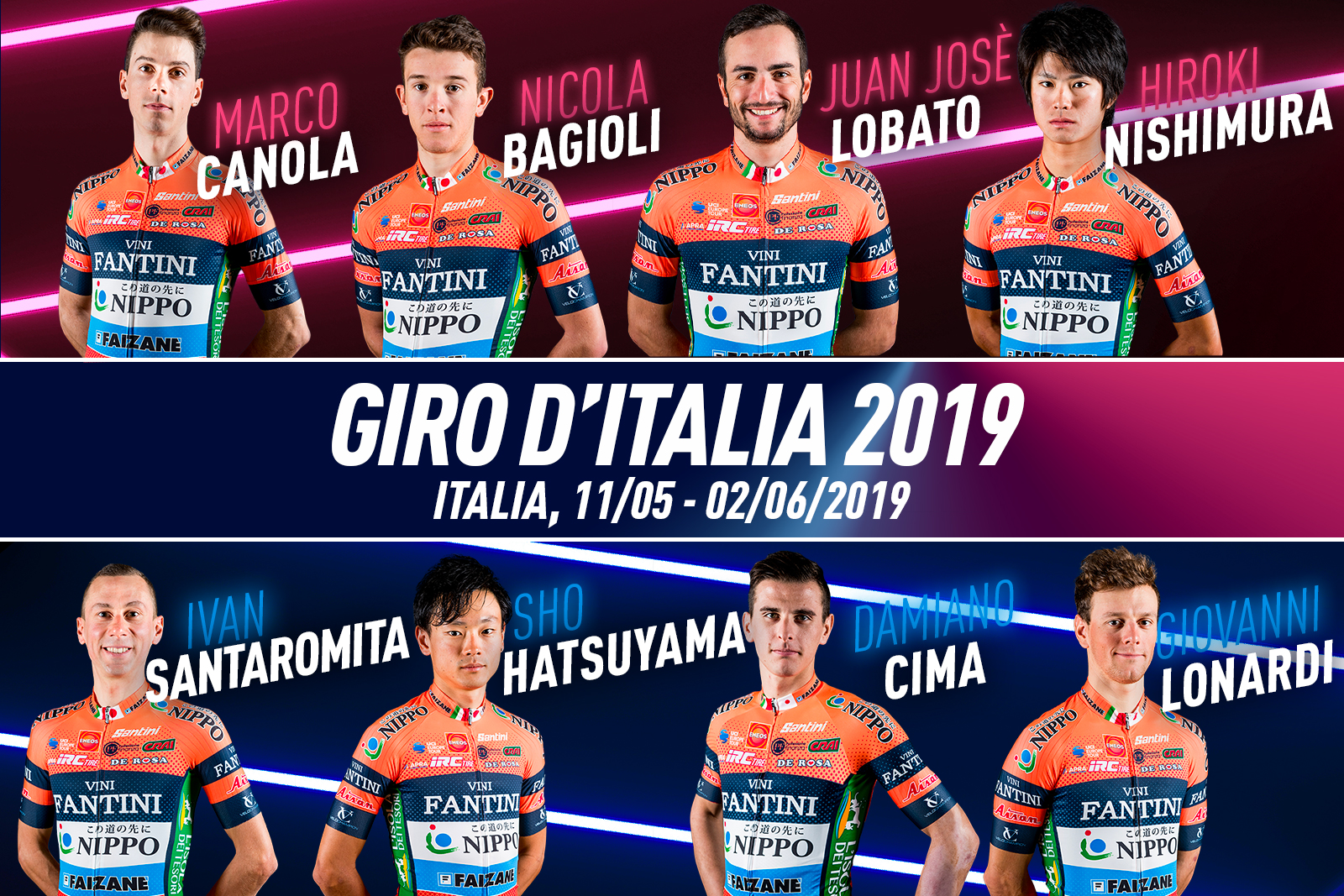 Giro d’Italia n.102, the Italian-Japanese line-up is back. Marco Canola the leader, Juan Josè Lobato the finisseur for the short climb sprint, Nicola Bagioli and Sho Hatsuyama the escape-man, Ivan Santaromita the climber, Giovanni Lonardi the young sprinter, Damiano Cima and Hiroki Nishimura team-worker. This is the #OrangeBlue line-up ready to ride Giro.

A young line-up with some experienced leaders, the one selected by the #OrangeBlue Sports Directors for the most important appointment of the season, the Giro d’Italia n.102. 8 riders, from 3 countries, for a mix of youth and experience that will guarantee to the NIPPO Vini Fantini Faizanè team the chance to be protagonists on every stage of the “Pink Ride”. 26 yo the average age, conditioned by the 3 experienced leaders, with 4 young riders launched by the team at their first Grand Tour among professionals. Among them, also a stage winner of the 2018 Giro Under23: Giovanni Lonardi.

The NIPPO Vini Fantini Faizanè line-up is a new record for Japanese cycling. It is the first line-up ever with 2 Japanese riders in the same team starting a Big Tour. A very  good signal for the Japanese cycling in the last year before Tokyo Olympics.

Marco Canola, the leader of the team who won a stage in the Giro d’Italia in 2014, is on his great return to the Giro d’Italia and very motivated to start strong to make his mark. At his side the Spanish athlete Juan Josè Lobato, winner of the Coppa Sabatini 2018, with 15 victories among PROs, is the most successful athlete of #OrangeBlue line-up at the start of the 102nd Giro d’Italia. Nicola Bagioli, Damiano Cima and Giovanni Lonardi compose a trio of Italian riders launched by the NIPPO Vini Fantini Faizanè team in 2017, 2018 and 2019 respectively with the latest one having already won two races in its first three months in professionalism. Hiroki Nishimura, born in Japan in 1994, will be the Japanese athlete ready to face his first Grand Tour to make an important experience, while the most experienced Japanese will be Sho Hatsuyama. Ivan Santaromita, Italian National Champion in 2013, will be the most experienced athlete on the team (35 years).

Mario Manzoni and Takehiro Mizutani will be the Sports Directors on the team cars at Giro d’Italia, but the choices were taken in concert between all the DS, with Valerio Tebaldi and Alessandro Donati, also considering the recent injuries and the concomitant Tour of Japan. Due to injuries of Filippo Zaccanti and Joan Bou, and most of all of Alejandro Osorio the line-up has been revised until the last day.

These are the words of DS Mario Manzoni about the Giro line-up:

“The most beautiful, important and demanding race of the season awaits us. We wanted to get there with a few less injuries, but these will be behind us from the first minute of the race because we want to play our chances every day. We have a perfectly assorted line-up for intermediate stage arrivals such as Marco Canola and Juan Josè Lobato also important as a team man. For the toughest stages an experienced climber like Ivan Santaromita who can emerge in the third week, a young man already as mature as Nicola Bagioli will be able to escape in some stages, as it is Sho Hatsuyama. Our man for the sprint arrivals will be the young Giovanni Lonardi, already a winner among the PROs, together with Damiano Cima, a fundamental team man expected in this Giro in his final test of maturity. Hiroki Nishimura will be an important team man. We will try to always be protagonists in every stage, for all the numerous Italian and Japanese fans that will follow and support us.”
THE ITALIAN-JAPANESE PROJECT:

The NIPPO Vini Fantini Faizanè team’s project is in its fifth year and at the gates of the Olympic year the process of integration and development is now complete. Italian and Japanese athletes, directors and staff work in unison. The Giro d’Italia n.102 will see an Italian DS and a Japanese DS, 2 Italian masseurs and 2 Japanese masseurs, as well as for the mechanical department, demonstrating the growth of the entire Japanese movement and total integration between the two cultures.

“Our project has combined two cultures with strong common values, the Italian and the Japanese. The balance between Italy and Japan in our team is integrated at all levels both among the sponsors, the staff and management and obviously among the athletes. This is the last full year before the Olympics we are happy to have accomplished our goals with athletes of both nationalities in their respective selections looking forward to the Tokyo 2020 Olympic Games. As a Professional team in this Giro d’Italia we will launch 5 young riders who will face for the first time a Big Tour, two of them neo-professionals and winners in 2018 at the Giro Under 23. All this can only make us proud and confident looking forward to the Giro d’Italia 2019”.