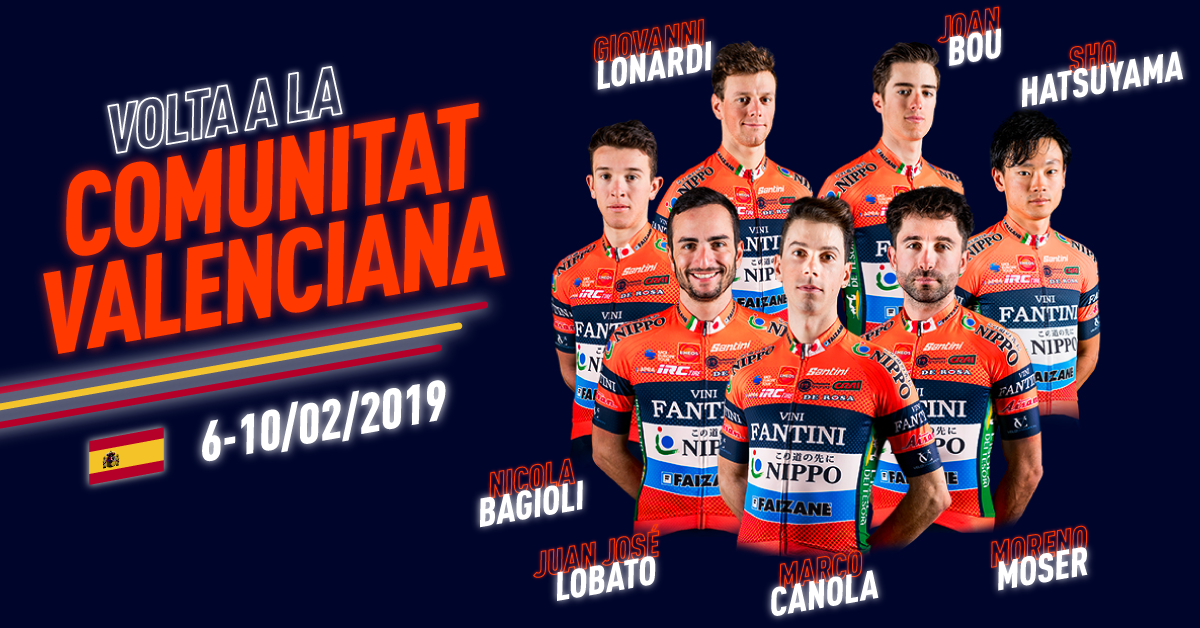 NIPPO VINI FANTINI FAIZANÈ: READY FOR THE EUROPEAN DEBUT TO THE VOLTA A LA COMUNITAT VALENCIANA WITH MOSER, CANOLA AND LOBATO.

The season European debut of the team is coming soon, in Volta a la Comunitat Valenciana at the start this Wednesday, February 6th. Immediately at the start the 3 leaders: Canola, Lobato and Moser in his official debut in #OrangeBlue. In Argentina the Vuelta in San Juan has finished with 4 top 10 reached by the team.

The 2019 European debut will be in Spain, at the Vuelta a la Comunitat Valenciana and the #OrangeBlue will line the 3 announced leaders of the season: Marco Canola, Juan Josè Lobato and Moreno Moser in his official debut also with the #OrangeBlue jersey. Debut with the new colors and among the professionals also for the young sprinter Giovanni Lonardi. Completing the roster 3 important team confirmations as Nicola Bagioli, in his third year among the PROs, the Japanese Sho Hatsuyama and the Spanish Joan Bou.

The #OrangeBlue lineup will be leaded in the team-car by the Sports Directors Mario Manzoni and Takehiro Mizutani. These are the words of the Italian Sports Director: “For all #OrangeBlue riders at the start it is the first race of the season, so we are curious to compare our condition with the one of our competitors to understand our level with the athletic preparation. The riders have trained well, Marco Canola and Juan Josè Lobato have already a good condition, while Moreno Moser we are happy to have recovered at the last minute from a flue virus, will be able to put important kilometers of race pace in the legs ahead of the upcoming events. The most important thing will be to work as a team all together, because it is the only way we can be competitive at a high level and take good results in this season.”
VUELTA IN SAN JUAN – RACE RECAP.

This Sunday ended also the Vuelta in San Juan, where the #OrangeBlue had the opportunity to compete with excellent competitors and where the youngest rider of the team have come to light, reaching 4 important top10 placements. Very well the young Colombian climber Alejandro Osorio born in 1998, who in the first stage wore the shirt of the best young rider, to then leave it to the new young phenomenon of world cycling, Remco Evenepoel. In one of the hardest stages, the fifth, he also reached an excellent 7th place reaching his first top10 among the professionals. Double top10 also for the young Italian sprinter in 1997, Imerio Cima in light in the group sprints. In the queen stage was instead the Japanese climber Hideto Nakane to impress with an excellent 10th place by joining the great climbers of World Tour team. Important as always the teamwork with Damiano Cima to lead his brother in the sprint and the experience of Ivan Santaromita to support the young climbers of the team.

These are the best placements of the #OrangeBlue in the seasonal debut race: