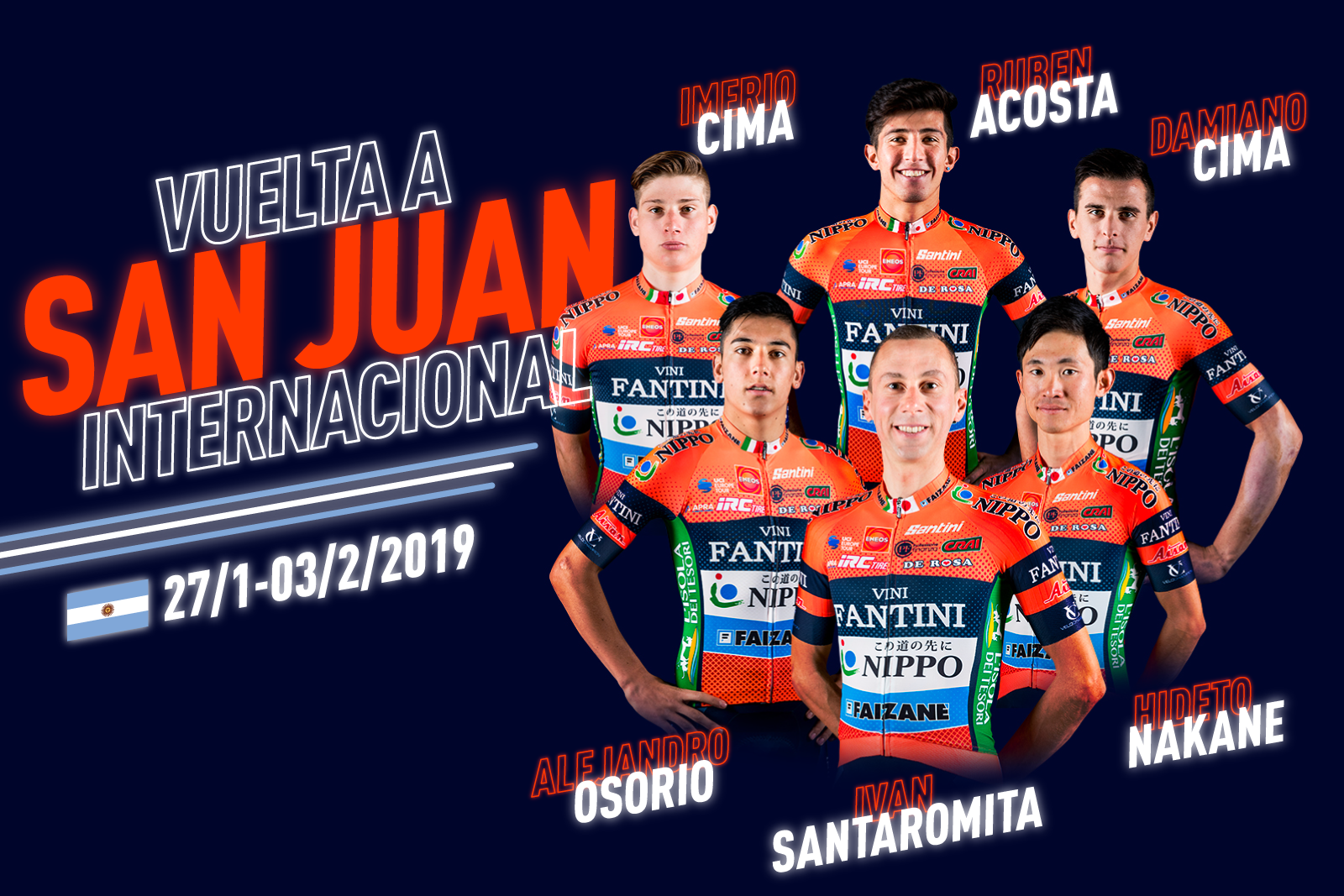 NIPPO VINI FANTINI FAIZANÈ: EVERYTHING IS READY FOR THE SEASONAL DEBUT IN VUELTA A SAN JUAN.

The #OrangeBlue are ready for the seasonal debut scheduled for Sunday, January 27th in Argentina, at the Vuelta a San Juan Internacional. At the start the climbers of the team with Ivan Santaromita and Hideto Nakane to lead the two neo-pro Alejandro Osorio and Ruben Acosta. For the fastest stages the team leaders will be the brothers Damiano and Imerio Cima.

Vuelta a San Juan, Argentina.
The 2019 team is ready for his debut, in South America, in Argentina this Sunday 27th of January with 6 rider. In the seasonal debut race, two absolute debuts are scheduled for the two young Colombian neo-pro Alejandro Osorio and Ruben Acosta. The Argentina race will take place over 7 stages and will have 6 World Tour teams at the start, among which the Bora by Peter Sagan, 5 Professional teams, and numerous South American National Selections.

THE LINE-UP
The NIPPO Vini Fantini Faizanè team will be at the start with a balanced line-up. 4 climbers, lead by the experienced leader Ivan Santaromita and the Japanese Hideto Nakane who after the great personal growth of 2018 has proved to have an excellent condition since the first tests of this 2019 and prepares to start strong in the last season before of the Tokyo 2020 Olympics. With them the two debutants Alejandro Osorio and Ruben Acosta. Space also for the fast wheels of the team with Damiano and Imerio Cima ready to compete in some of the most congenial stage arrivals.
Official line-up: Ivan Santaromita, Hideto Nakane, Alejandro Osorio, Damiano Cima, Imerio Cima, Ruben Acosta.
DS: Valerio Tebaldi.

THE DECLARATION.
These the pre-race words of Valerio Tebaldi, the Sports Director of the team in this race:
“The team is preparing for the 2019 debut with a well-balanced team to face even the toughest stages of the Argentine race and try to be competitive in the sprint. It will be a first important test for the two neo-pro Colombian climbers Osorio and Acosta, for our experienced man Ivan Santaromita and especially for Hideto Nakane appeared immediately in great condition in the pre-season tests. We will look for a good result in the hardest stages trying also to take care of the overall ranking, looking for a top 10 placement. For the fastest stages the Cima brothers are very motivated with Damiano who has already proven to be able to win and the young Imerio Cima looking for a new season of successes after an unlucky 2018 with too many injuries that stopped him.”