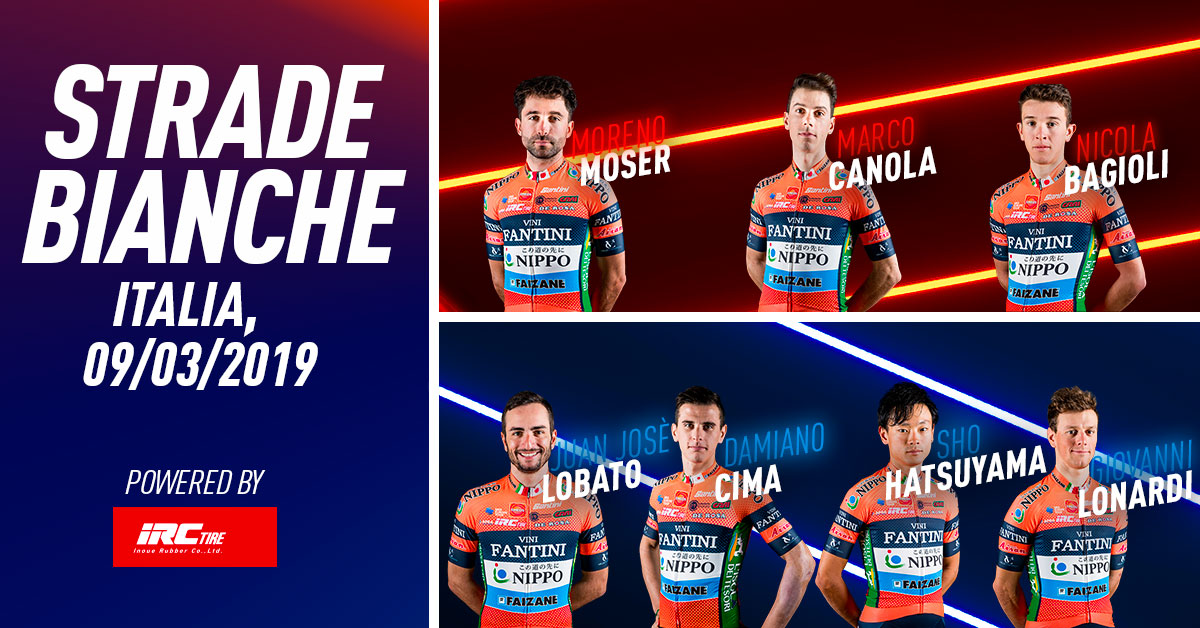 A great classic of modern cycling awaits this Saturday the team that on Saturday will ride Strade Bianche. On the start line with the #OrangeBlue jersey the former winner of the 2013 edition, Moreno Moser. On Sunday another important event in Tuscany, with the GP Larciano where Marco Canola in 2018 reached the second place.

A Weekend of great Italian cycling, with two high-level races in Tuscany. The #OrangeBlue this Saturday will be one of the 3 Professional teams at the start of the Strade Bianche, organized by RCS Sport. At the start with the #OrangeBlue jersey Moreno Moser, winner of the 2013 edition and the only Italian in the history of the competition to reach the highest step of the podium. On Sunday the team will be at the start of the GP Larciano where in the 2018 edition Marco Canola came second at the end of a race in which the #OrangeBlue were great protagonists.
STRADE BIANCHE.

On Saturday 9th of March appointment in Siena where at 10.40 the first Italian World Tour race of the season will start. 184 km with 11 stretches and 63 km of “Strade Bianche” on which the 147 riders of the 18 World Tour teams and of the 3 invited Professional teams will compete, including the NIPPO Vini Fantini Faizanè.

The #OrangeBlue will line up the only Italian athlete capable of winning this modern classic, inaugurated in 2007: Moreno Moser. The #OrangeBlue roster will be then composed by Spanish rider Juan Josè Lobato, the Italian Marco Canola among the most fit of the team in this start of the season, together with the young Nicola Bagioli. For Japan, there will be Sho Hatsuyama, while the two young Italians Damiano Cima and Giovanni Lonardi will afford an important World Tour level race, coming from the excellent performances at the Tour of Antalya.

On the tramcar the Sports Director will be Mario Manzoni, who introduces the race with these words: “It will be a Saturday of great cycling, in a race that we want to honor at our best, we will try to be in the breakaway of the day with at least three of our athletes, such as Hatsuyama, Lonardi and Cima, preserving our 4 leaders covered for the decisive part of the race. We will have top level competitors but the first competitors will be the road, with 11 parts of “strade bianche” and 63 km of dirty roads will be a spectacular but very hard race.”

Sunday, March 10 the team will ride again in Tuscany with the GP Larciano. 7 World Tour teams awaited at the start, along with the Italian national team and numerous high-level Professional teams on a congenial path to the #OrangeBlue that already in the 2018 edition gave a show with numerous athletes of the team active in the final and in particular Marco Canola, second on the finish line.

Marco Canola, together with Ivan Santaromita, was a great protagonist in 2018, but in this 2019 Ivan Santaromita could be influenced by the bad fall in Colombia that caused him a strong bruise on his back. Moreno Moser, Juan Josè Lobato, Nicola Bagioli, Giovanni Lonardi and Sho Hatsuyama will represent important arrows to the DS Alessandro Donati arch.

These are the words of the Sports Director #OrangeBlue: “The road is very suitable to our skills and we will have different solutions in race and many potential leaders if we race with the correct mood and mentality, with the desire to get a great result. Marco Canola, JJ Lobato, Nicola Bagioli and Moreno Moser will start with the rank of captains, while Ivan Santaromita could be influenced also by the fall occurred in Colombia. Giovanni Lonardi and Sho Hastuyama will give a precious support to their teammates.”

Both races will be broadcasted live on Raisport. Strade Bianche will have a great international coverage with also Eurosport covering the live of the race. In GP Larciano the race will be broadcasted also in Facebook live-streaming by PMG Sport, but the true show will be close to the roads of Tuscany where big public is awaited to follow these two races.