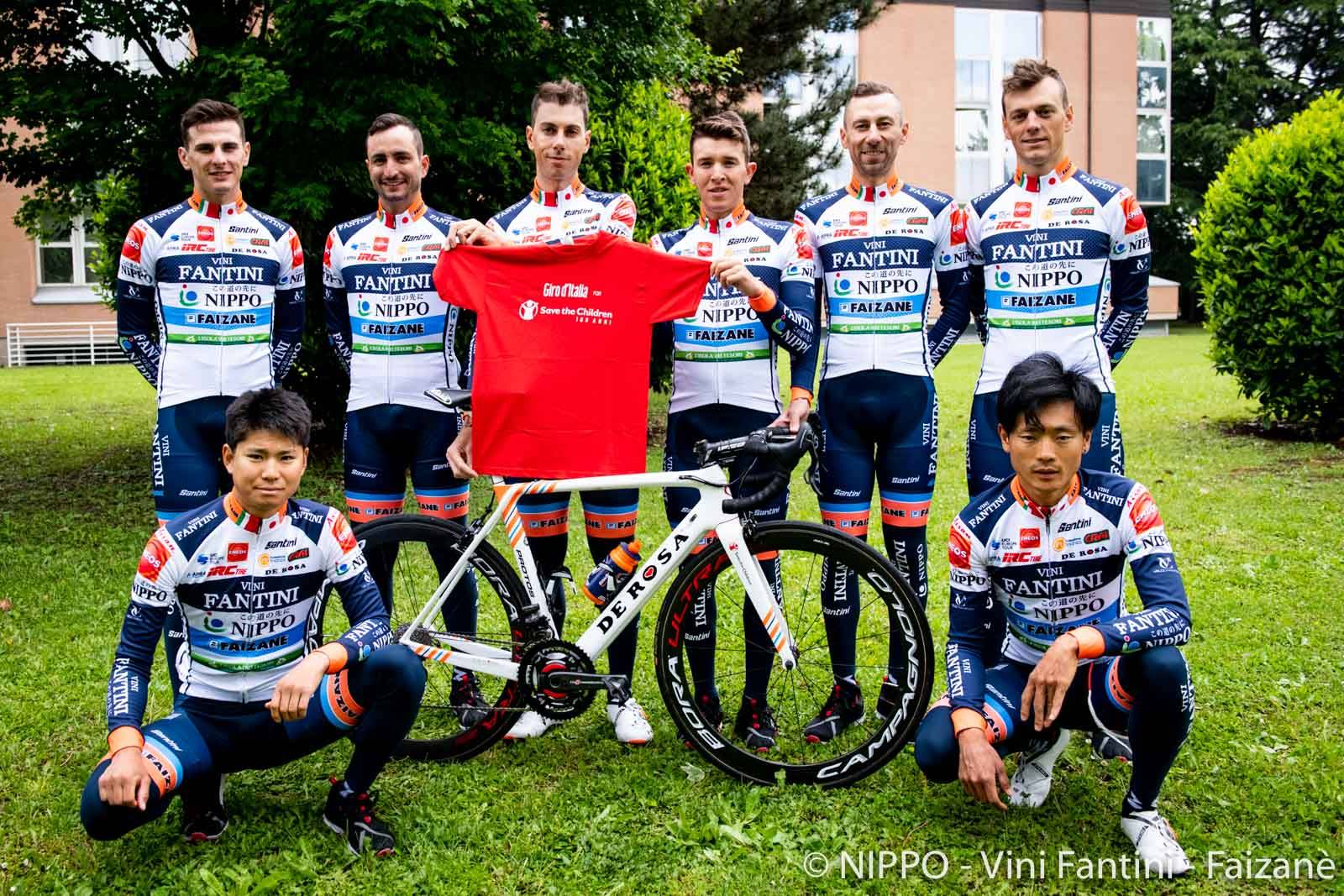 Save the Children and the Nippo Fantini Faizané team come together on the roads of the 102nd Giro d’Italia for a special partnership, signed on the occasion of the Save the Children’s centenary – charity partner of the Giro d’Italia – and to support the launch of the new campaign “Stop the war on the children”.

Worldwide, one child in five lives in conflict areas where the childhood is daily denied in all its aspect, daily and with violence. The Nippo Fantini Faizané team returns to the Giro d’Italia with the stand side by side with Save the Children to support its campaign message, in line with the team’s traditional values of ethic, transparency and fairness.

The Save the Children logo will be on the frame of the team’s De Rosa bikes, on the team car and on all the other team’s vehicles. The team will also shoot a tv commercial to raise awareness about the campaign. Three other single spots will see the captain Marco Canola, the Spanish Juan José Lobato and the young Nicola Bagioli as protagonists.

The team members will also take part to the many sensitization activities carried out by Save the Children in different moments of the cycling event, leaving for instance their handprints on the canvas at the organization’s hospitality areas on the finishing straight. With this gesture, cyclists, supporters and all the Giro d’Italia “carovana” can leave a sign of their support to the global campaign.

Together with the cyclists and the whole Nippo Fantini Faizané team, the other Save the Children partnership testimonials at the 102nd Giro d’Italia will be the Coach of the Italian Cycling Team Davide Cassani and Vincenzo Nibali, two-time winner of the Giro d’Italia.

It is possible to help Save the Children deliver food, water, medical supplies and shelters to millions of children. You can donate via SMS or Call at the 45533.

Francesco Pelosi, the Nippo Fantini Faizané General Manager, said “For us at Nippo Fantini Faizané is a great honor to be ambassadors of such an important message. We have often been engaged in initiatives aimed at promoting youth sports programs with our kid and junior teams. It is horrible to realize that many children in the world cannot even have the simple dream of riding a bike because they live under the threat of insensate wars. I hope we may contribute to raise awareness about this campaign and urge all cycling lovers who – we know – have a big heart to give their contribution to say stop the war”

The team captain Marco Canola also expressed his support “Knowing that all our actions could have an impact in giving visibility to this important campaign and remind that one child in five lives in conflict areas would will be a further incentive for the whole Giro. I will personally donate by sending a text message to the 45533 and I invite our supporters to do the same. The best thing they could do to show us their support throughout the competition will be show their support to the “Stop on war” campaign”.

Filippo Ungaro, Save the Children Communication Manager, said “Cycling is a sport made of passion, resilience, effort, team spirit and courage but those are also the values shared by the Save the Children workers who are forced to ride for miles when other means are not available and tirelessly make any effort to help as many children victims of war as possible. We are persuaded that the team Nippo Fantini Faizané will be capable of promoting this idea acting as a remarkable testimonial”.

Everybody can support the Save the Children campaign thanks to the solidal number 45533 active until September, the 30th and provide children fleeing war with shelter, medical supplies and educational programs. It is possible to donate 2€ via SMS or to donate 5 or 10€ by calling the same number from your landline with TIM, Vodafone, Wind Tre, Fastweb e Tiscali. From the landline it is possible to donate also with the providers TWT, Convergenze and PosteMobile.

The amount raised will support the Save the Children projects to guarantee shelter, medical supplies and educational programs to the children fleeing from the war in Uganda.

· Youtube
The official channel of Save the Children Italia is www.youtube.com/savethechildrenIT