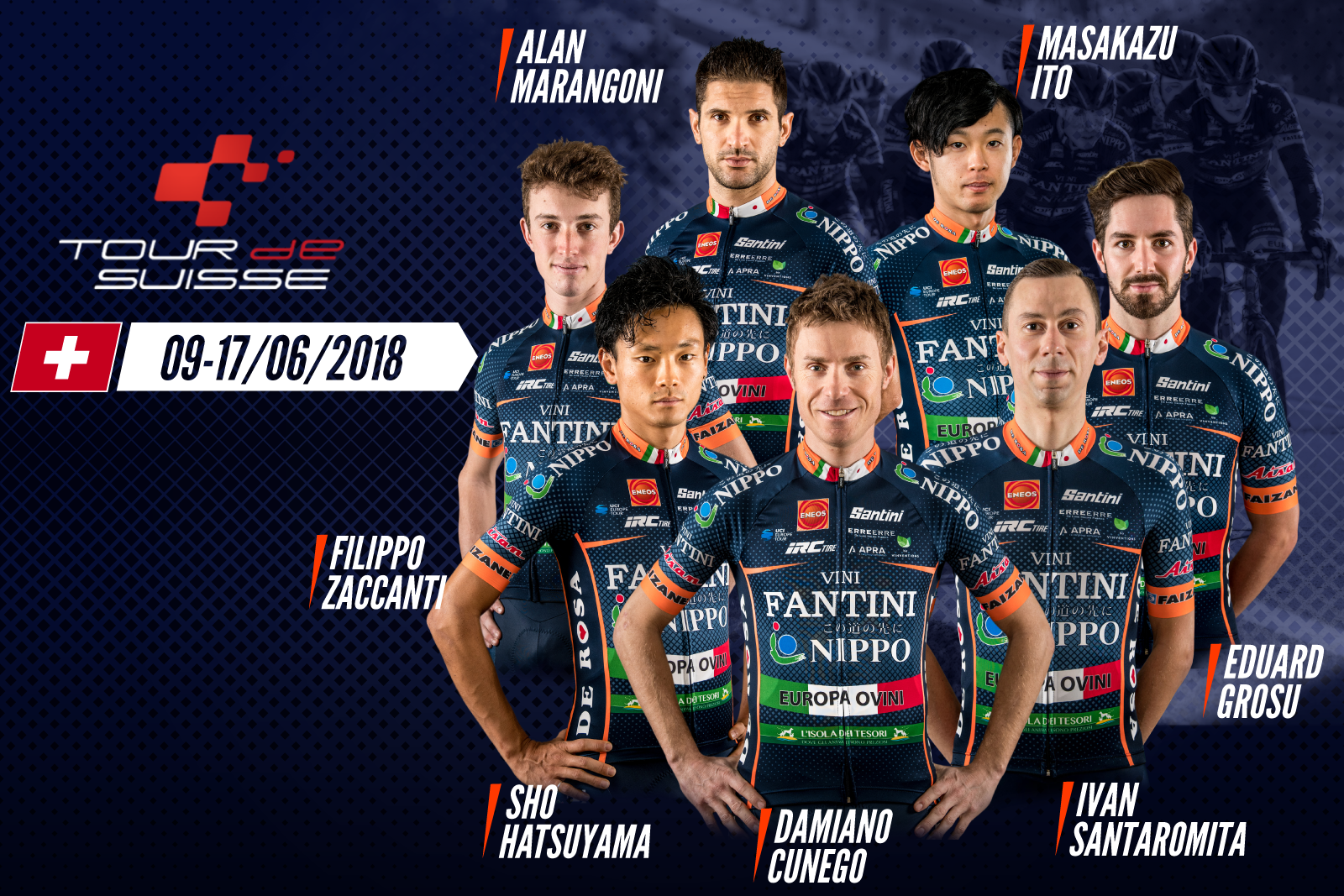 From 9th to 17th of June will take place the Tour de Suisse, the last Big Tour of Damiano Cunego and one of the most important moments of the NIPPO Vini Fantini Europa Ovini season. Together with Cunego to the start-line the Italian climber Ivan Santaromita, the Rumanian Sprinter Eduard Grosu, the Japanese climber Sho Hatsuyama together with a team ready to animate the race.

The last Big Tour of Damiano Cunego is coming soon. From 9th to 17th of June the NIPPO Vini Fantini team will participate to the Tour de Suisse, thanks to the Wild Card of the organizers, as the only Italian team on the start-line. Big names and great champions in a very important race of World Tour category, where the team will race both with team ambitions and to celebrate the career of a great champion as Damiano Cunego.

A very strong link between Damiano Cunego and the Switzerland competition, with several participations in different years, with a very important second place in the general ranking in 2011, after wearing also the leader jersey for several stages. From this link the decision of Cunego and Tour de Suisse organizers to celebrate the final Great Tour of his career with the Tour de Suisse. These the words of Damiano Cunego about the race: “A wonderful race, which whom I have a great feeling, both with the organizers and with the public. An hard race, with many climbs, in a wonderful landscape. In the Tour de Suisse previous editions I made some very good placements, 4 final top10, one 2° place in 2011. In 2018 I will ride it for the last time and I’m yet focused on some stages. Which ones? Follow the Tour, we will discover it together.”

A TEAM READY TO ANIMATE THE RACE.

On the team car the Sports Directors are Valerio Tebaldi and Shinichi Fukushima, that selected a line-up to support Cunego and also to be able to animate the race. Ivan Santaromita prepared in altitude the competition and will be one of the top climbers of the team. Eduard Grosu is the sprinter for the couple of stages where fast riders can play a role. Sho Hatsuyama the Japanese rider ready to attack, together with the teammates Alan Marangoni, Filippo Zaccanti and Masakazu Ito.

These the words of Valerio Tebaldi: “The Tour de Suisse is one of the most important races of the year for us. A big World Tour competition, where we are the only Italian team to the start. For Damiano Cunego it is a race with a double meaning. One coming from the past, when in 2011 he reached the 2nd place of the General Ranking, and one in the present because this competition represents the final World Tour race of his career. As a team we will have other important riders, with Ivan Santaromita as main climber, he prepared this race very well. Eduard Grosu will be our sprinter, with good chances in a couple of stages, but we have to save him in mountain. Then we are ready to make an offensive race with riders as Sho Hatsuyama, Filippo Zaccanti, Alan Marangoni and Masakazu Ito.”

The Tour de Suisse, World Tour competition, will have 18 World Tour teams and 3 Professional teams in race, thanks to the wild cards of the organizers. The NIPPO Vini Fantini Europa Ovini team is the only Italian team that received the ambitious wild card. To the start big champions, but #OrangeBlue riders will try to animate the race, that will be broadcasted worldwide. From Europe you can connect on Eurosport starting from 3.00 or 3.30 pm depending from the days.