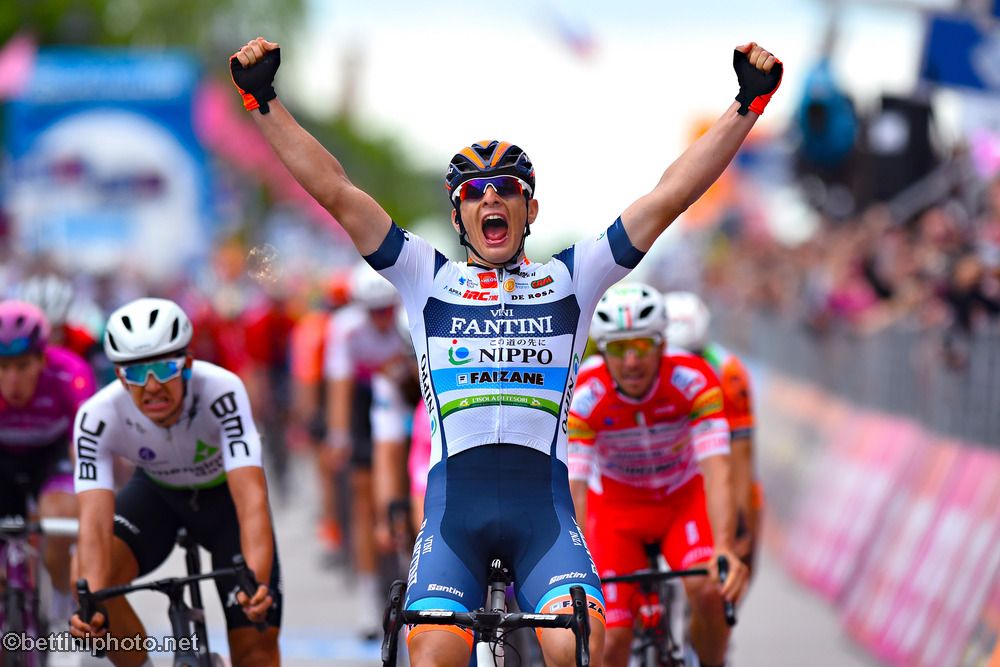 172 km of breakaway, almost 1000 km rode in front of the group in the Giro to win a stage in Giro d’Italia. A victory achieved with grit, determination, but also a lot of lucidity in the final meters despite the fatigue. “A victory for the whole team, the DS and the teammates, a victory that we wanted strongly and achieved all together fighting every day together to achieve this result.”

Damiano Cima is the winner of the stage n.18 of the Giro d’Italia n.102. A victory obtained with extreme lucidity even after 172km of today’s breakaway and after almost 1000 km of riding in front of the bunch in Giro d’Italia. A victory achieved with a sprint in the sprint, with the advancing group reabsorbing just two meters before the line the two riders of the breakway except for Damiano Cima who today wrote a page of important history for him and for his team.

The embrace with Marco Canola after the finish line, the tears of Juan Josè Lobato, the fatigue accumulated by all the teammates in the 18 stages of this Giro d’Italia culminate in the best result of this team’s history, a victory in a World Tour stage, a victory in the most important race of the season: the Giro d’Italia.
THE WORDS OF THE WINNER.

Damiano Cima comments his victory, the fourth in his career, the first in Italy in the most important race: “During the race I really understood that we have the chance to arrive only 1km from the finish and it was a really intense final where I tried to keep calm and think about the last 350 meters. I thank also the other riders in the breakaway we worked together until the end to play our chances. I am really happy to have succeeded in giving a victory to all the people who believed in me. To the NIPPO Vini Fantini Faizanè team, to the DS Mario Manzoni who strongly wanted me and believed in me, to all the teammates with whom we fought in these days and with whom we had staked this stage. My thoughts also go to my family who made sacrifices to make me run, to my girlfriend Veronica and two people who are no longer here, namely my grandfather, a great cycling fan and Pierino Farimbella.”
THE BREAKWAYS AND THE VICTORY.

Nervous day, where a massive final sprint was expected, the breakaway started with attacks and attacks. At km 50 the winning attempt starts with Damiano Cima, Mirco Maestri and Nico Denz. The escape takes off but seems to be kept under control by the group that only in the final 20 km accelerates considerably, but in front of the three athletes are good and intelligent continuing to cooperate perfectly up to 3km from the finish line when some shots and attempts begin. Damiano Cima despite the almost 1,000 km of breakaway (about 930) collected in 4 actions rode in front of the group. The athlete from Brescia born in 1993 and professionally launched by the NIPPO Vini Fantini Faizanè team, is the athlete who has collected the most km of escape in this Giro d’Italia, crowned and culminated today in the most beautiful dream for every rider: the victory in the Pink Race.
CLASSIFICA TAPPA 18: