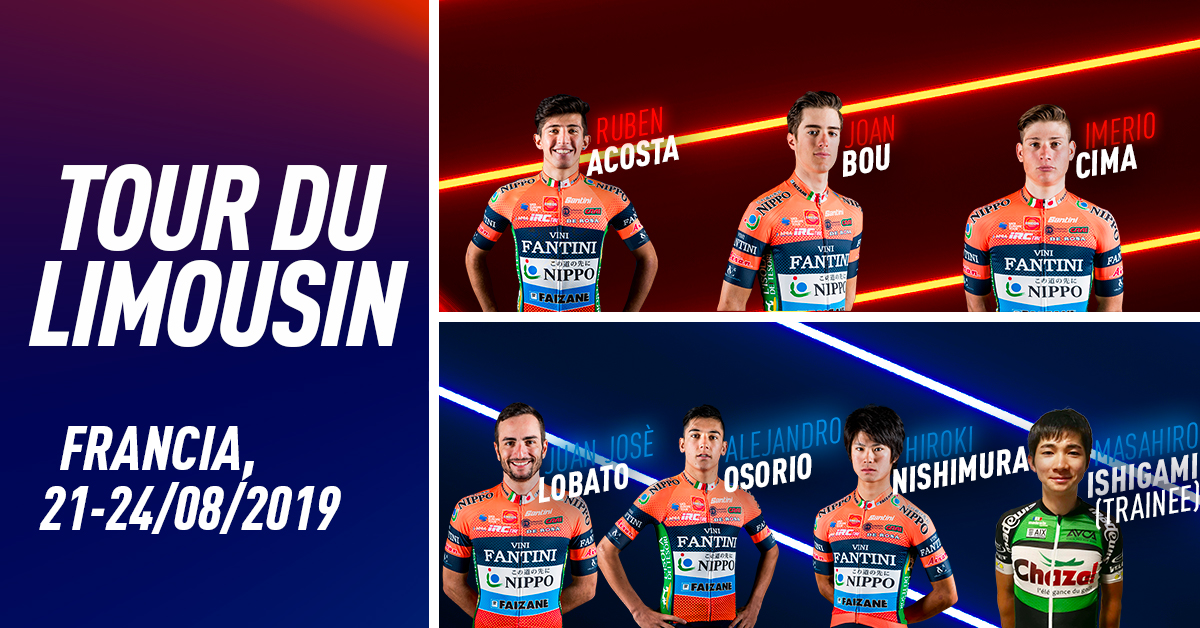 Appointment on the French roads for the NIPPO Vini Fantini Faizanè team. From 21 to 24 August 7 #OrangeBlue riders will be ride at the Tour du Limousin, chasing success after the excellent results achieved on the tour last season.

A second part of the season started in the best way for the Italian-Japanese team, with Marco Canola‘s victory in Salt Lake City during the Tour of Utah. From August 21st to 24th, the #OrangeBlue lineup will try to repeat itself on the French roads of the Tour du Limousin, a race made up of 4 mixed stages that saw us protagonists in 2018.

7 #OrangeBlue riders at the start of the Tour who make up a well-matched line-up ready to be a great protagonist both in the stages with fast arrivals and in those dedicated to climbers. Juan Josè Lobato, several times close to success in this 2019, will be the team’s reference during the stage with restricted sprints. At his side the young Imerio Cima, the fast wheel that will try ti be protagonist in the group sprints and that will help his captain in the stages dedicated to him. Joan Bou, in excellent physical condition after the Vuelta in Burgos, leads the group of climbers together with the Colombians Alejandro Osorio and Ruben Acosta. Hiroki Nishimura, after the good performances at the Vuelta a Burgos, will be the teammate ready to be protagonist in the day’s escapes. Completes the line up Masahiro Ishigami as a #OrangeBlue stagiaire.

THE DECLARATION OF SPORTS DIRECTOR

Leading the #OrangeBlue from the team car will be sporting directors Alessandro Donati and Takehiro Mizutani. These are the words of DS Alessandro Donati on the eve of the French race: “We arrive from a Vuelta a Burgos race as a great team and with excellent positive signs. We only missed the victory but I’m sure it will arrive at the Tour du Limousin. At the French race we are aiming at the general ranking with Alejandro Osorio and Joan Bou, motivated after the Burgos placings. For the stages with fast arrivals our spearheads will be Juan Josè Lobato and Imerio Cima. To achieve the result we have set ourselves will be fundamental the work made by Hiroki Nishimura, Ruben Acosta and the stagiaire Masahiro Ishigami, to his second race in #OrangeBlue jersey. The sensations are positive, I am convinced that we will be among the great protagonists of the tour “.